A park set at night time

Twinkle Park (トゥインクルパーク, Tuinkuru Pāku?) is an Action Stage that appears in Sonic Adventure, Sonic Adventure DX: Director's Cut and the 2010 remaster of the game. It is the fifth Action Stage played as Sonic, the first Action Stage both as Amy and as Big. It is an expansive theme park located in Station Square. As with most other Action Stages in its games, Twinkle Park has different level designs for each character, which have three optional missions each.

Twinkle Park is based off of a theme park, and every part of it is designed to give off a magical feel, with neon lights and sparkly objects everywhere.

When Amy hurries into Twinkle Park, hoping that their free entrance fee for "cute couples" will persuade Sonic to join her, Sonic is forced to chase after her since ZERO is hot on her trail. During his trip through Twinkle Park however, Sonic loses track of Amy, and so heads out to find her after leaving it.

During his search for Froggy, Big ends up in Twinkle Park. Upon arriving inside the park, Big finds Froggy in one of the local water pools, where he manages to catch him. By the time he leaves Twinkle Park however, Froggy has escaped him again.

When riding in a Bumper Car, the Bumper Car speeds up and accelerates faster the more Rings that are collected, eventually capping out at 99. Collecting large amounts of Rings is essential if the player wants to travel at high speeds. Regardless, the black Bumper Car is the fastest out of all the bumper Cars.

Sonic starts out on a race track with enemies driving bumper cars around. Sonic must defeat an enemy and steal its bumper car, then take to the track. After this area, Sonic jumps in a roller coaster, then proceeds to run through a variety of amusement park obstacles built around a castle.

Amy starts out by the large swimming pool where she must push three buttons in a certain amount of time to proceed. Afterwards, she heads into the castle, which turns out to be a giant house of mirrors. Afterwards, she proceeds through a short section of Sonic's level before finishing and grabbing the balloon.

Big starts out in the giant swimming pool area, where he is tasked with catching Froggy. The area is very small, and there are not many fish here, which can make catching large fish for Big's "B" and "A" level missions somewhat difficult.

In the Sonic X comic series published by Archie Comics, Twinkle Park is a theme park located in Station Square. In this media, it is very different in terms of layout, being an outdoor amusement park with a variety of rides.

In the Sonic the Hedgehog comic series and its spin-offs published by Archie Comics, Twinkle Park is an attraction in Station Square, its layout and past history being virtually identical to that of the games. When the Shattered World Crisis hit, Twinkle Park was severely affected, forcing the Freedom Fighters to evacuate the visitors. 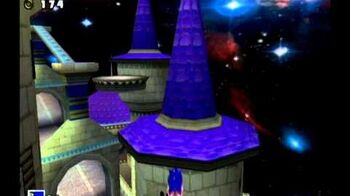 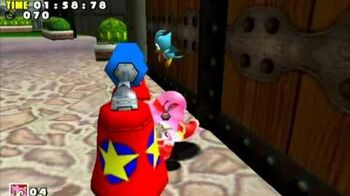 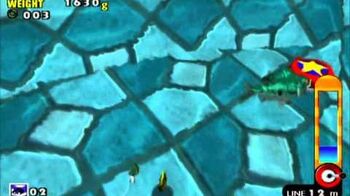