The leader of the Twilight Cage Pirates, from Sonic Chronicles: The Dark Brotherhood.

The Twilight Cage Pirates (トワイライトの海賊, Towairaitu no Kaizoku?) are former members of the Nocturnus Clan, and, true to their name, are pirates who reside in the Twilight Cage and prey on space ships, as well as Sonic's world). When they are encountered they appear in battle as Nocturnus Praetorian.

The Twilight Cage Pirates like the excessive space in the Twilight Cage, and caused much havoc, although this caused them to be banned from the Nocturnus Clan. They had a plan to get back with them in Sonic Chronicles: The Dark Brotherhood, when they took a shipment of valuable cargo from one colony of the Twilight Cage to another (either from N'rrgal to Kron, Kron to the Zoah, Zoah to the Voxai, or Voxai to the N'rrgal). Their leader also speaks like a stereotypical pirate. Rouge constantly prods at him for this, saying that it was unusual for pirates from another dimension to speak in such a way. He argues with her, explaining that it's a speech impediment. This is probably untrue, because he only mentions this when Rouge gets on his nerves. 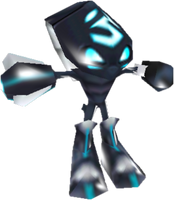