For the category, see Category:Turtles.

Sonic riding a Turtle in Sonic the Hedgehog (2006).

The Turtle is a gimmick that appears in Sonic Adventure 2 and Sonic the Hedgehog (2006). They are large, non-anthropomorphic, turtles that live in water and are a natural part of the fauna on earth. In gameplay, they can be used to transport through bodies of water.

The Turtles look exactly the same as freshwater turtles in the real world. They have flippers for legs, round and sturdy shells and completely dark blue or brown eyes. While their skin color is fairly consistent, being pale beige with hints of green, the colors of their shells differs between games; in Sonic Adventure 2 they are dark green and in Sonic the Hedgehog (2006) they are brown. However, what set them apart from regular turtles are their colossal sizes, as they can be so large that they can carry up to several people on their backs.

In gameplay, the Turtle's purpose is to help the player reach locations far into the bottomless waters or gain access to otherwise unreachable areas through water routes.

In Sonic Adventure 2 and its remake Sonic Adventure 2: Battle, the Turtles are slightly larger than the size of a small rowing boat. They are found exclusively in Dry Lagoon where one can transport the player to different sections of the Stage through different pools.

When beginning the Stage, the Turtle is usually surrounded by robots on land, keeping it from the pool. Destroying the robots allows the Turtle to crawl back into the pool where the player can interact with it. To use it in gameplay, the player must jump onto its shell and press the action button to have it transport the player to another pool.

In Sonic the Hedgehog (2006), the Turtles are much larger, at least three-four times bigger than they were in Sonic Adventure 2, and they have grass and moss growing on them.

In this game, the Turtles act more as floating platforms which the player can use to ride across bottomless waters. To use them in gameplay, the player just has to jump onto their shells and they will start moving. In some cases, the Turtles will not appear until the player hits a fruit in a sprig which will cause them to emerge and eat the fruit.[1] The player can also cause the Turtle to hide in the water by using a Homing Attack on its head. 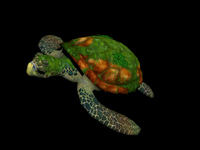 A model of the Turtle in Sonic the Hedgehog (2006).
Add a photo to this gallery