True Area 53, or Truth Area 53, is the true final Zone in Sonic Advance 2. A level set in outer space, it consists of a true final boss battle, which is fought as Super Sonic. True Area 53 can be accessed in Sonic's mode after the player defeats the final boss of XX with Sonic with all the Chaos Emeralds and beating the game with all the other characters.

Super Sonic had to fight against Dr. Eggman's newly-created mech to free a captured Vanilla and Flickies.

True Area 53 is set in an outer space region close to Earth as it is present in the background.

After losing to Sonic, Dr. Eggman found Cream's mother Vanilla in a meadow with some Animals and used his mech to capture them while cloaked. Sonic, Tails, Knuckles, Cream and Cheese arrived just as Eggman flew away. Cream couldn't do anything more than watch as Eggman got away with her mother and cry. Sonic, seeing Cream in tears, uses the power of the seven Chaos Emeralds to transform into Super Sonic. Sonic slyly gives Cream a thumbs up and chases after Eggman.

After the mech is defeated, the capsule containing Eggman's captives starts to fall towards the planet. Super Sonic then tries to stop its fall, but the capsule breaks while Sonic loses his Super Form and Vanilla is falling. Sonic tries to save her and manages to grab her hand just in time. Sonic makes a safe landing and Cream embraces her mother with tears in her eyes. While Tails and Knuckles watch the loving moment, Sonic runs off for another adventure.

Unlike any other level in Sonic Advance 2, the player controls Super Sonic who can move in all eight directions in airborne with the

and can perform the Super Sonic Boost by pressing

alongside a direction to boost towards the said direction, which can help avoid getting hit by the True Area 53 boss's attacks as the said move also grants temporary invulnerability against these attacks. The player must collect the numerous cluster of Rings which appear frequently in the level as the player's Ring count (initially at 50) will continually tick down over the course of the stage. Should the player's Ring count hit zero, Super Sonic will de-transform, fall off the level and die, causing the player to lose a life and has to restart the level from the beginning.

The boss fight which the level is set for is a mech controlled by Dr. Eggman capable of knocking back the player with energy projections as well as freeze and vacuum weapons that prove to be potentially dangerous as the two can drain the player's Ring count further. The player must utlize the missiles fired by the mech to damage it and towards the end of the battle, it performs a spinning attack towards the player. 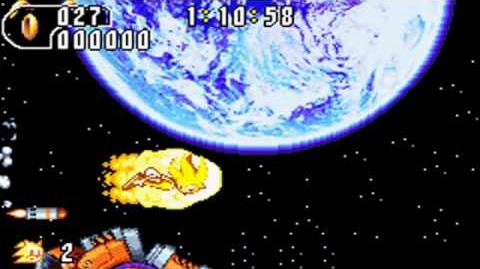