View source
watch 02:56
Raise a Floppa - The Loop
Do you like this video?
Play Sound
Main page GalleryRed Star Rings

The Tropical Resort as seen from space, from the Wii version of Sonic Colors.

Next stop, the Tropical Resort. There, you'll find breathtaking views from our giant Ferris wheel, amazing deals in the shopping mall, and constant risk of bodily harm.

The Tropical Resort is a gigantic shopping mall located in Dr. Eggman's Incredible Interstellar Amusement Park, acting as the heart of the park on the underside of the Egg Mecha. The place has a picturesque view of space and Sonic's world. The Area itself is a beautiful park full of lights and vibrant colors, decorated with vegetation, apparently from foreign planets,[1] giant wooden masks and "WELCOME!" signs. Despite their innocent appearance, the stars surrounding the Tropical Resort are unfiltered and full of deadly radiation.[2] It is also a great place to get some interstellar shopping done.

Sonic and Tails arrive at the Tropical Resort after having suspicions about Dr. Eggman's Incredible Interstellar Amusement Park. Sonic thinks that the park is just another one of Dr. Eggman's evil schemes for world conquest, but Tails tries to convince him to just enjoy the place. Eventually however, they find Orbot and Cubot, Eggman's lackeys, trying to catch a White Wisp and a Cyan Wisp. After Sonic saves the aliens, the Cyan Wisp gets into his body, giving him the Cyan Laser Color Power for a short time. As the heroes cannot understand the Wisps' language, Tails starts to make a translator from his Miles Electric to communicate with them. Meanwhile, Sonic explores Tropical Resort to find answers.

Making his way through the Tropical Resort, Sonic frees any Wisps he can find. Eventually, he finds Eggman, who is counting some kidnapped Wisps in the company of Orbot and Cubot. Frustrated since Sonic keeps getting in the way of his plans, Eggman orders the release of the Rotatatron (or Globotron in the DS version) to destroy the hedgehog while he and his lackeys leave the scene. While Sonic manages to destroy the robot easily, he is unaware that one of its parts has gotten stuck in Eggman's mind control cannon.

Sonic soon after meet up with Tails and the White Wisp again, with Tails having finished his translator. With the device, the heroes learn from the White Wisp (who introduces himself as "Yacker") that Eggman is kidnapping the Wisps. With this intel in hand, Sonic, Tails and Yacker leave the Tropical Resort to save the Wisps from Eggman.

After freeing all the Wisps from Eggman, Sonic and Tails return to Tropical Resort to celebrate with the Wisps. However, shortly after, they are all forced to leave, as Eggman's malfunctioning mind control cannon had accidentally created a black hole that had begun consuming the Tropical Resort.

The Tropical Resort is a fast-paced Area, with many secret paths to find with the use of Color Powers. Grind Rails are very common in the Acts.

Before any opening cinematic or even asking for player data, the game throws the player straight into Tropical Resort Act 1. This introduces the player to the basic controls of the game, such as jumping, grinding, the Homing Attack and the Boost. Despite being an introductory stage, there are many areas in this Act for the player to explore once they unlock the Cyan and Yellow Wisps later in the game. At the end is a Prison Capsule to break open to clear the Act.

Tropical Resort Act 2 is an extension of the previous Act, this time focusing primarily on 2D sections and introducing the player to slower platforming and objects such as fans that will propel Sonic vertically to reach Rings, platforms, and Wisp Capsules. Right before the end of the stage, there is a hill lined with Egg Pawns scattered in a zigzag pattern, along with prisms that Sonic can ricochet off of using the Cyan Wisp to knock all of them out in succession later on once he acquires it. The Act ends with a Prison Capsule for Sonic to break open.

Tropical Resort Act 3 introduces the player to the Quick Step and the Cyan Laser. In the later part of the Act, there is an area full of boxes that Sonic can break through using the Stomp attack. This Act has two Goal Rings at the end of the stage. One is accessed via the Cyan Wisp.

Tropical Resort Act 4 is a short 2D Act. Despite its size, collecting all of the Special Rings in this Act requires a bit of exploration, and two of them can only be reached by using the Purple Wisp, which isn't unlocked until much later in the game.

Tropical Resort Act 5 makes use of the Cyan Wisp, focusing on prisms that Sonic can ricochet from and targets that he can break to earn more points. Some of these targets are hidden beneath boxes that can only be reached by using the Pink Wisp and Cyan Wisp. Some prisms can only be reached by jumping up and pointing the laser downward.

Tropical Resort Act 6 is a short 2D Act, similar to the previous two Acts. This Act introduces rotating platforms and platforms activated by switches. There is also a sealed-off section near the end of the Act that requires the Pink Wisp to access. This is one of the few Acts that Super Sonic cannot be played in due to a lack of enough Rings in the upper section.

The Tutorial Stage in the Nintendo DS version of the game takes place at the Tropical Resort. Tails walks the player through basic functions such as running, jumping, sliding, stomping, the Spin Dash and the Wall Jump.

Tropical Resort Act 1 is where Sonic and Tails first run into Yacker and the White Wisps, chasing away Orbot and Cubot, who are looking to capture them. The level itself is fairly straightforward and encourages the player to use the basic moves from the tutorial. Near the end of the Act, there is a 3D Hang Glider sequence in which the player can move around to avoid obstacles and collect Rings while gliding. There are more areas to explore here after unlocking the White and Red Wisps.

The Act starts out with Sonic boosting and smashing past a barrier, releasing a ferris wheel that will roll after Sonic. Sonic must remain boosting in order to keep ahead of the ferris wheel and avoid being crushed by it. The rest of the stage is much like Act 1, mainly filled with straightforward fast-paced sections. There are more routes accessible once the player can use the Red Burst.

Orbot and Cubot are hassling Cream and Cheese, having mistaken the Chao for a Wisp and attempting to kidnap him. To clear Mission 1, Sonic must collect thirty White Wisps within one minute by defeating Badniks or destroying Wisp Capsules.

After the mission, Cream explains that she mistook the space elevator for a ride and traveled up to the park with Cheese.

Orbot and Cubot have kidnapped a Chao and will not release it unless Sonic wins a game. Mission 2 is a Time Trial in which checkpoints will increase Sonic's remaining time. To clear this mission, the player must reach the goal before time runs out.

After Cheese and the other Chao have been rescued, Cubot returns, complaining that his previous failures meant that Eggman sent them to bed without dinner. To clear this mission, Sonic must collect two-hundred and fifty Rings within one minute and thirty seconds. After completing the mission, Cream worries about the robots going without food again, although Sonic tries to explain that machines do not quite work that way.﻿

This area's boss is a one-eyed robot named Rotatatron. The arena consists of a ferris wheel-like loop that extends all the way around the rest of the level, and platforms that orbit the center and spin occasionally. To attack the boss, the player has to either use the Homing Attack on the eye or use the Cyan Laser on any part of the boss (hitting the eye or arms is most effective). The boss attacks by grabbing at the player if they are on the frame or by shooting spinning shuriken-like bombs at them if they are on the platforms. The boss will be defeated after it takes 2-4 hits.

The Tropical Resort boss takes place in a circular arena versus Globotron. As with most bosses in the game, the boss is fought on a 3D rotunda. Globotron periodically lashes down with its arms; if the player boosts into an attackable part of Globotron's limbs, they wil be rewarded with a Red Wisp, which can be used to attack the boss floating in the air.

Please note that the following rankings only apply to the Wii version of the game.

At various points during the stage, Eggman's voice is heard in the background over a loudspeaker. He says the following phrases: 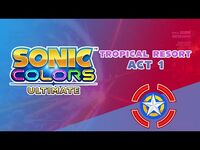 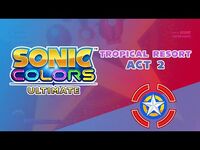 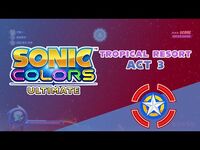 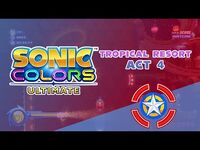 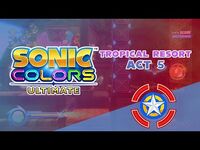 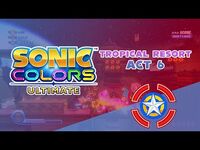