Tropical Coast is a stage in Sonic Runners that was playable for an event.

It looks visually similar to its appearance in Sonic Lost World and has the distinct touch of changing the time of day depending on how far the player has progressed in the level.

Team Sonic are on vacation at a beach resort when they find Eggman stealing the beach's many pearls to finance his bases. As they head out to stop Eggman, Team Sonic meet some Wisps and learn that Eggman has kidnapped Mother Wisp while she was visiting her children. With Team Rose's aid, Team Sonic track down Eggman, but are too late to stop Eggman from turning Mother Wisp into Dark Mother Wisp. When Dark Mother Wisp proves too powerful for Eggman to control though, she goes on a rampage until her Wisp children calms her down, reverting her back to normal. Team Sonic and Team Rose thus focus on getting back every pearl Eggman stole.

Being a special event, the stage is suitable for all ability types of characters, featuring the same obstacles and enemies encountered in Windy Hill, Sky Road and Lava Mountain

An Event available from 20 August to 27 August 2015, which introduced the Special Stage "Tropical Coast in Summer", where players have to collect pearls in order to climb the Event Rankings, proceed in the new Episode and unlock various prizes such as the Super Rare Buddy Mother Wisp. The Event also added two new Buddies to the Premium Roulette, those being the Rare Buddies Blowfish Transporter and Marine Chao. 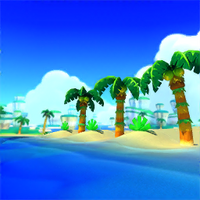