Not to be confused with Tropical Jungle or Tropical Resort.

The beaches of Tropical Coast are not as they seem. Packed full of seaside Badniks out to take down Sonic the Hedgehog, he must use all his might to blast across islands and even go underwater!

Tropical Coast (トロピカルコースト, Toropikaru Kōsuto?) is the third world in the Wii U version, PC version and Nintendo 3DS version of Sonic Lost World. Its aesthetic is primarily based around that of a beach, complete with lush vegetation and even some tropical fruit for Sonic to interact with. Its boss is Master Zik.

In the Nintendo 3DS version of the game, the player can find Blue Material in the Zones if they are finished successfully.

Zone 1 of Tropical Coast on the Wii U version takes place in an open-spaced environment, similar to the first stages of previous Zones such as Windy Hill. The location takes place by a beach shore area, with palm trees and Badniks taking usage of the land. Water overflows into fountains that Sonic the Hedgehog can use to jump on to reach a higher ledge. The Orange Wisp is found in this Zone and can be used to activate the Orange Rocket. The Yellow Wisp is present in this Zone, allowing Sonic to drill through to the other side of the tube and move freely underwater, collecting Rings before the gauge runs out and Sonic is sent back to the other side.

Zone 2 takes place in another tropical beach area, only this Zone is filled with giant fruits as the main gimmick and obstacle. These consist of a giant apple which will follow Sonic and will damage him on contact, a giant pineapple that will repel from Sonic should he get close to it and a giant watermelon that will follow Sonic and damage him on contact like the apple but at certain intervals, the watermelon will jump into the air, creating a shockwave upon landing. The player will need to lure these fruits into the spinning bladed blender which will create a path of fruit juice that will transport him/her to progress through the Zone. The player must be careful not to land in the spinning bladed blender or it is an instant death. The Orange Wisp is found in this Zone and lets Sonic transform into the Orange Rocket. Master Zik is battled at the end of the Zone, where he chases Sonic atop a giant fruit.

Zone 3 takes place in an entire underwater tube, where Sonic must grind on grind rails and avoid giant, mechanical eels that can defeat the hedgehog. Minecarts also are seen moving along on the grind rails, either ahead or behind Sonic as he grinds through the zone. Sonic must jump over them or he will take damage. This zone has two segments; a completely behind-the-back perspective while grinding and a 2.5D segment, featuring Nebula Badniks.

Zone 4 is another Zone set in the tropical areas, starting with 3D sections where the player must defeat Badniks to get an Orange Wisp and proceed. The rest of the Zone is a 2.5D obstacle course with platforms across water the player must jump across, ending in another boss battle with Master Zik.

In this Zone, the player starts by running on a grassy platform toward a Cannon. Once launched, a strong air stream lifts Sonic up in the sky which a lot of familiar and new Badniks come in the view. In this stage, the player can descend by holding the Homing Attack button and leave it to ascend. There is only one point marker in this zone, and the player will encounter a platform above him with a lot of buzzsaw-like flowers to avoid. The Zone ends once the player reaches the BFB which requires to descend beneath it, but above the Bottomless pit. Afterward, the player will reach the Capsule.

Tropical Coast Zone 1 is a 2.5D Zone that is set up like a traditional water level in classic Sonic the Hedgehog titles. Most of the Zone is played underwater, with the player having to use the Yellow Drill (which is introduced here) to navigate mazes full of iron balls and twisters. Areas above water are filled with gimmicks such as Grind Rails, geysers that catapult Sonic, and stepping stones with spiky undersides.

Zone 2 starts on a small Island inside a large tube in which Sonic must defeat four Moto Bugs to unlock a giant spring which will bring Sonic to another island which Sonic will have to roll two apples into a hole. Doing so will unlock another spring, which will take the player back to the small island.

Now the player has to toll the apples into the juicer to elevate the island. After that, enemies will appear and Sonic will have to destroy them in order to unlock the next island. The player will have to repeat the actions from rolling apples into holes and unlocking springs, to juicing apples then to destroying Badniks.

Eventually, the player will obtain the Ivory Wisp (provided it has been unlocked in Frozen Factory) on the 2nd island; it can be used to obtain a Red Star Ring among other things.

Zone 3 is a 3D stage that is also mostly underwater and revolves around heavy use of the Yellow Drill. Throughout most of the Zone, the player is roaming around in a 3D space to drill through twisters and defeat Badniks to collect more Yellow Wisp Item Boxes. At specific points, the player is sucked inside a massive cyclone that they must navigate through with the Yellow Drill in order to escape; should the Yellow Drill run out in these sections, it means instant death. There is also a "Super-Speed Stage" section halfway through the Zone that has Sonic running on a cylinder of water and grabbing rings using a Lightning Shield.

The Extra Zone is only playable after collecting every Red Star Ring from Tropical Coast's main Zones. It primarily reuses assets from Zone 3, although more equal amounts of time are spent above and below the water's surface. Heavy use of the Ivory Lightning is required to progress, as it is only while in this form where Sonic can harmlessly bounce off of electrical bombs and travel across wide chasms. Some of the targets are surrounded by water sacks, which can revert Sonic to normal and make him fall if his aim is poor.

This is the only Extra Zone in the game to not reuse a music track from the main stages. 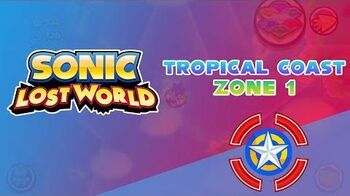 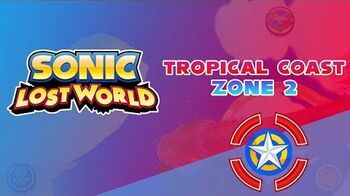 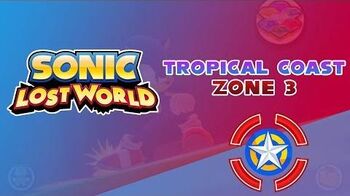 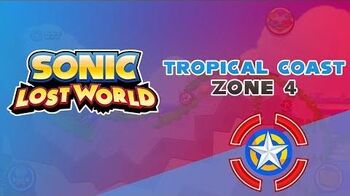 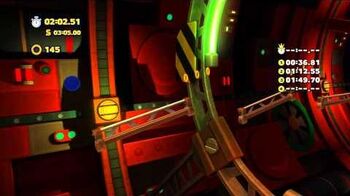