Sonic News Network
Register
Don't have an account?
Sign In
in: Sonic and the Black Knight, Species, Extradimensional beings

For the species in the Archie Comics, see Troll (Archie).

Concept artwork of a troll, from Sonic and the Black Knight.

Trolls are creatures that appear in the Sonic the Hedgehog series. They are gigantic, green-colored monsters that inhabit the World of Camelot. In that world, they have become enslaved beasts that pull wagons across Titanic Plain, seemingly enjoying their enslavement.[1]

Trolls are giant humanoid creatures that are titanic in size, being countless stories high. They are all colored green, with a red ragged kilt being held on by a golden belt. They have white fangs with a blue tongue, two chains wrapped across their torso, and blue toe nails. Each of their feet are chained by large black wrecking balls, which helps keep them in check.

Despite their intimidating size, the trolls are actually used because of their amiable character and can be quite friendly.[2]

Trolls are only seen in the Titanic Plain area, where they pull wagons across the fields. Sonic the Hedgehog with Caliburn comes across these trolls during the level, where they serve as a obstacle (although given how the route is already laid out, it is impossible to accidentally be hit by a troll). 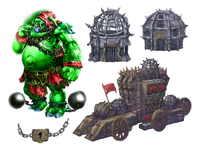 Trolls and the prisons.