The album contains all four playable teams' theme songs, the main theme "Sonic Heroes" and "What I'm Made Of" similarly like the vocal albums in previous 3D Sonic games. In the same tracklist, the album has six bonus tracks, featuring all five theme songs and Open Your Heart from Sonic Adventure. This is due to the album promoting Sonic Adventure DX: Director's Cut for the Nintendo GameCube.[citation needed] 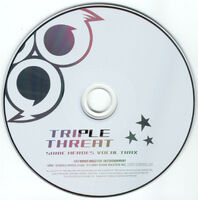