"Trick Sand" is the sixtieth episode of the anime series, Sonic X. It first aired on 18 March 2005 and 29 October 2005 in France and the United States respectively.

The episode opens with a dream from Chris, in which he remembers the events of Space Colony ARK and the loss of Shadow. He is awakened by Tails, who tells him he has just found the signal from a Chaos Emerald. Inside the Crimson Egg, Rouge returns to the secret room she has just discovered and she spots a Chaos Emerald which is powering the strange capsule. She tries taking the Emerald, but she activates an alarm. At the same time, she discovers that Shadow is currently hibernating inside the capsule before being found out by Dr. Eggman.

The Blue Typhoon follows the Chaos Emerald's signal to a dark, abandoned world called Planet Hobidon. Sonic, Amy and Knuckles search inside an old castle using the Comlink, while Chris and Cosmo look inside an ancient colony. Sonic's group quickly notices that the castle is a trap; in fact, it is an illusion created by the Metarex Deserd. Meanwhile, Chris and Cosmo find a video with a distressing news about the planet attacked by the Metarex. After leaving the colony, Chris tells Cosmo he was dreaming earlier about Shadow and tells her about him. But the conversation is shorted when Tails tells them that he has lost contact with Sonic's group.

Chris and Cosmo see the castle rippling. Chris takes off in the Hyper Tornado and saves Sonic's group from the Metarex. This Metarex suddenly turn the castle into a sandtrap and almost catches Sonic, but Chris comes to the rescue. The Metarex attacks Sonic's group and Chris. Sonic try to counter-attack using a combination of his new rocket shoes and the Ring Tunnel, but he is not able to beat the Metarex and is electrocuted. Chris tries to save Sonic, but the Hyper Tornado is damaged by the attack, and almost falls to his doom. At the same moment, in the Crimson Egg, Shadow awakens and he teleports himself to the fight place. He easily defeats the Metarex, saves Chris, and shows his presence to everybody. He looks at Chris, who just said Shadow's name, and he disappears. Shadow comes back to the Crimson Egg with the two Chaos Emeralds and passes out in front of the shocked Dr. Eggman and Rouge. 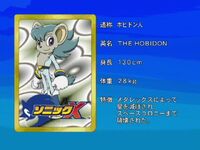 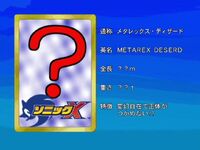