A variant of the Jump Panel

The Trick Jump Panel,[1][2] also referred to as the trick jump platform, is a gimmick that appears in the Sonic the Hedgehog series. It a variant of the regular Jump Panel that allows midair actions when used.

There also exist a more advanced form of the Trick Jump Panels. These panels resemble the right triangular prism variant of the Jump Panels, except that they have a yellow coloration and differently-colored arrows on them. When touching such a panel, it will automatically initiate a dash that sends the playable character flying through the air, during which the player can perform beneficial midair actions exclusive to it. What effect these actions have differs between games.

In Sonic Adventure and its later iteration, Sonic Adventure DX: Director's Cut, the Trick Jump resembles a regular, albeit long ramp with a yellow and orange-checkered surface. In this game, they are referred to as "Jump Ramps".[3] They are only encountered in Icecap during the Snowboard section and in Sand Hill.

In Sonic Adventure 2 and its later iteration Sonic Adventure 2: Battle, the Trick Jump Ramp is called Ramp[4] and looks much like it did in Sonic Adventure, but its surface is now marked with orange and white arrows. It retains many of the same effects from the previous title, although the player must have gained momentum before using it, its jumping speed and flying distances are lessened, and the player cannot move on their own while in midair.

In gameplay, the player must press the jump button while moving over it to utilize its full effects. Depending on the player's timing, they will gain bonus points ranging from between 200-1,000 points.

In Sonic Battle, the Trick Jump Ramp's design is almost the same as the one they had in Sonic Adventure 2, except they have black frames with blue lights on the sides. In this game, they are only encountered in the Shadow's Speed Demon mini game.

In Sonic the Hedgehog (2006), the Trick Jump Panels are white and red-arrowed plates embedded in the ground. They are only encountered in Sonic's version of White Acropolis, during the Snowboard sections. Like in Sonic Adventure, they are called "Jump Ramps".

In Sonic Unleashed, a new type of Trick Jump Panel was introduced. This variant looks like a Jump Panel, resembling a very technological right triangular wedge with yellow edges, a black running treadmill with yellow arrows on it, and red and blue arrows on the side. They are only encountered in the daytime Stages.

These Trick Jump Panels are used to reach shortcuts or cross obligatory paths. When touching them, the player is instantly sent into a flying jump, eliminating the need to build up momentum or manually initiate a trick. After being sent flying, the player must complete a series of Real-Time Interactions consisting of three or six-button sequences. Competing the interaction will result in Sonic pulling off a trick in midair that will increase his jumping height and allow him to complete the jump. Failing will make the player fall down prematurely, often into a bottomless pit.

In the console/PC version of Sonic Generations, two types of Trick Jump Panel appear. The first type of Trick Jump Panels resemble ramps. They have yellow edges and blue, yellow and white arrows on top of them. These panels appear in City Escape Act 1 and 2, and in the Rooftop Rail Grind Challenge Act. In gameplay, the player has to press

while on them to achieve a higher leap; in Modern Sonic's case, pulling such a trick off will also fill up a part of his Boost Gauge.

The second type of the Trick Jump Panel looks exactly like they did in Sonic Colors. These panels only appear in the second Act of each Stage. In gameplay, Trick Jump Panels are nearly ubiquitous; after being sent flying into the air by them, the player can move the left control stick in different directions to execute Freestyle Tricks that will fill up the Boost Gauge. Pressing

at the same time will trigger a combo finisher.

In the Nintendo 3DS version of Mario & Sonic at the Rio 2016 Olympic Games, the Trick Jump Panels look just like they did in Sonic Colors. These panels appear in the BMX Plus event, where the player can jump off of them by pressing

just before going off them, with each jump being rated depending on how close to the top of the Trick Jump Panel the jump was performed. The playable characters in particular will gain a speed boost and fill the Super Dash Gauge with well-performed jumps, with better rated ones giving a larger boost to their speed and filling the Super Dash Gauge a greater amount. 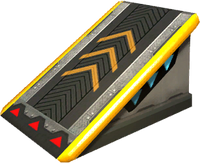 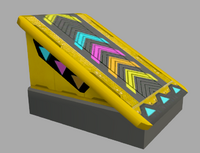