The users link hands, creating a triangle shape to catch air and float.

Triangle Dive[1] (トライアングルダイブ, Toraiangurudaibu?) is a Power Formation maneuver used by Team Sonic and Team Dark in Sonic Heroes. When performing this move, the team members join together to drift through midair or reach higher areas by utilizing vertical drafts.

When performing the Triangle Dive, all three members on the team arrange themselves in midair into a triangle shape. They then put their hands together in the center of the formation, allowing them to catch the air beneath their bodies and slow their descent. While descending, each team member gives off their respective aura.

To perform the Triangle Dive, the selected character has to be in Power Formation with Power type member (Knuckles the Echidna or E-123 Omega) as the leader. The player must then press and hold down the jump button (

) while jumping or in midair and can as well use the control stick to move in different directions. To break the Triangle Dive, the player has to release the jump button. 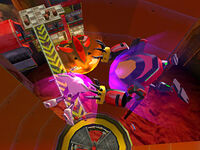 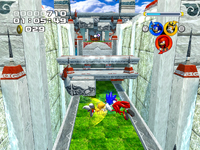