An intricately designed course intended for monkey-balling, but now converted to decide who's the ultimate speedster of the jungle. With sharp turns to take one after another, the use of drifting will be a decisive factor on this track. Banana peels are found everywhere, which is a normal racing condition in a jungle course filled with monkeys.

Treetops is a racetrack that appears in Sonic & Sega All-Stars Racing. It is one of three tracks in the game that represent Super Monkey Ball, as well as the fourth course in the Graffiti Cup.

Drifting is essential is this winding course with numerous hairpin turns. Shortly after the starting line, orange-colored arrows point in various directions. This stalls newer players into taking time to decide which way to go. The best thing to do is probably to start out with one long slide heading into the first of those turns, then let it carry the car through several more before alternating between drifts left and right as the player navigates the tight turns typical of this stage.

After steering through most of the course's turns, things straighten out for a moment as rivals race toward a purple speed pad. Racers can zip straight over it with a boost that will carry them across a gap and keep them lined up for the narrower, ascending path ahead, or they can veer to the left and right for an item and more speed pads.

For this Monkey Island-located track, these are the following tracks selectable for the course: 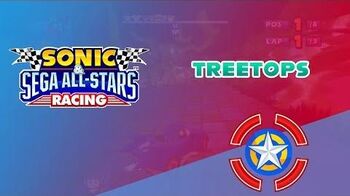