A Trap Spring in Sonic Generations.

Small square spring that have the Eggman Empire logo in it.

Trap Springs (ニセバネ, Nise Bane?), also known as Egg Springs, are variants of springs which first appeared in Sonic Unleashed. These springs serve as traps to either break the player's momentum or knock them off course.

Trap Springs typically have an angular square shape with the Eggman Empire symbol on their panel. When a Trap Spring is touched, it bounces Sonic lightly in the opposite direction. Unlike normal springs, Trap Springs do not bounce very far away and the player will lose the momentum after touching it. In general, Trap Springs notoriously knocks Sonic into a trap and after touching it, with a high-pitched laugh being played every time it makes contact. These springs are usually spotted in the end of grind rails and during 2D sections in the Stages.

First appearing in Sonic Unleashed, Trap Springs can be found in every daytime Stage in the game. These simple springs are colored as red and have black and white Eggman logo on it.

Trap Springs make another appearance in the Wii version of Sonic Colors, where these small springs are now seen more rarely, mostly being featured on Planet Wisp. Trap Springs have also different look, as it has yellow and black striping around and red center with newly designed Eggman Empire logo on it.

Trap Springs make their latest appearance in the console/PC version of Sonic Generations, as not only it retains the same design and effects from Sonic Colors, but it can also knock the player down momentarily. Trap Springs are featured mostly once again on both acts of Planet Wisp. 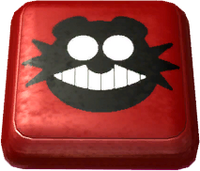 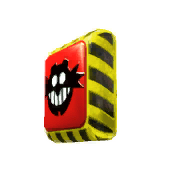 Sonic Generations
Add a photo to this gallery