A theme park filled with toys

Toy Kingdom (トイキングダム, Toikingudamu?) is the fourth Zone in Sonic Advance 3. It is one of the parts of the earth that Dr. Eggman created when he broke the planet apart with Chaos Control.

Different sorts of toys are scattered throughout the Zone that are gimmicks or hazards; these include jack-in-the-boxes that contain Springs or spikes depending on the color of the diamond on the box, giant clackers, rockets to reach high places with and toy soldier enemies. There are also balloons as well as elephant slides and cute panda Tea-cups for the player to ride.

Like the other even-numbered Zones in Sonic Advance 3, the third Act ends with a mini-boss fight with Gemerl, only this time the Gizoid has a new weapon: He will fire missiles from his back that will home in on the lead player, but like previous encounters, he will go down after being hit four times (twice on Easy mode). If the player has Sonic in the lead and finishes Act 3, Amy Rose will be unlocked for use in the Main Game and Time Attack.

In keeping with this Zone's theme, Dr. Eggman uses a Jack-in-the-box named the Egg Cube as the boss of the place. Unlike other (major) Boss battles, Gemerl plays a major role in this battle. The boss begins with Dr. Eggman appearing from inside the box and Gemerl appearing as the "Jack" coming out if the top.

Eggman does not attack at all in this boss, all he does is make the boss move slowly to the left of the screen, if he makes it to the end of the screen he will sweep back and fourth almost guarantying death. When you hit Eggman, he'll disappear into the box, and Gemerl will attack. Gemerl's first attack is to launch into the sky as a rocket, and slam down into the player. His second attack is to leap out of the box in a huge spiked mine, (to the left) and slowly scrape his way back to the box. Gemerl's third "attack" is to simply jump out of the box as a Jack, not attacking at all- just don't touch him or the top part of the box. Eggman deploys Toy Soldier Badniks out of the box, three at a time.

The starting screen of Toy Kingdom. 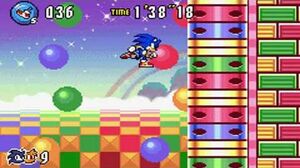 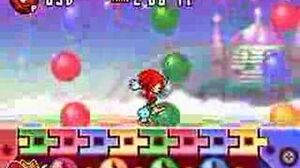 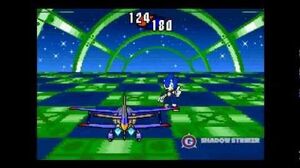