Sonic News Network
Register
Don't have an account?
Sign In
Advertisement
in: Sonic and the Black Knight, Species, World of Camelot inhabitants

The townspeople, also known as villagers or followers, are a species that appear in Sonic and the Black Knight. They are the primary inhabitants in the world of Camelot. They usually reside in their capital, Camelot Castle, but can also be found in the kingdom's surrounding lands.

According to the creators of Sonic and the Black Knight, the townspeople were designed to embody the spirit of the forest.[1]

The townspeople are a race of humanoid creatures resembling a cross between dwarves and elves. They have long pointy ears, dark eyes, and they usually have pale, yellowish skin. In terms of height, the townspeople come in different respectable size, though they can be as tall as about 6'6". They usually wear full-body cloaks and have facial tattoos.

While not strictly resembling humans, members of their race such as Merlina the Wizard can bear a closer resemblance to humans, standing taller with more human-like body proportions and similar eyes, with only their long ears being their distinguishing trait.

The townspeople mostly live a lifestyle similar to that of real-life people in the medieval ages. Just like humans, most of them just want to get on with their lives despite the craziness around them as they do not like to concern themselves with trivial matters.[2]

Around the Deep Woods, the townspeople live in settlements such as pastoral farmlands, and in Titanic Plain, migrating townspeople reside in moving wooden forts.

The townspeople have a unique way of breathing, as they breathe in carbon dioxide and breathe out oxygen, similar to trees.[1][2]

Many of Sonic's quests and missions in Sonic and the Black Knight often involves Sonic aiding the townspeople in some way. While the Townspeople will continue their lives throughout the adventure, they will only interact with Sonic through Acts of Chivalry or need his help. It is considered dishonorable to attack the Townspeople thus earning the name "Despised One" in the treasury. When enemies appear they will flee but can still be harmed if Sonic is not careful when attacking.

Additionally, the player can collect a number of townspeople from each Mission in the game, where they are called "Followers", which can be used to improve the player's title. 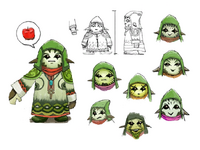