Tails in his Tornado Racer in Sonic & Sega All-Stars Racing.

Yellow colored plane, that is also able to drive on the land.

Tornado Racer is a vehicle that appears Sonic & Sega All-Stars Racing. It is a yellow plane belonging to Miles "Tails" Prower that is built as a land-based version of the Tornado. According to the game's website, it is built with parts found after an attempted invasion by Dr. Eggman.

The Tornado Racer appears to be a yellow version of the Tornado, with a shortened wingspan and hull to make it closer to the size of other land vehicles like the Speed Star, and with its engines moved to the back.

The Tornado Racers appears to be capable of at least some flight like the standard Tornado, as it hovers just above the ground while moving.

In Sonic & Sega All-Stars Racing, the Tornado Racer made its debut as Miles "Tails" Prower's racing vehicle in the game. It has the following statistics:

Tails' All-Star Move is Tails Tornado, where he presses a button on his racing plane and suddenly the plane starts performing a vertical barrel roll that makes a huge tornado. Tails Tornado is able to pull him forward, while at the same time it sucks up opponents and used items in the tornado's path. After doing it, the Tornado Racer returns to normal driving mode. 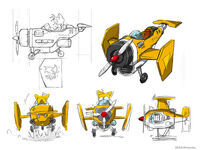 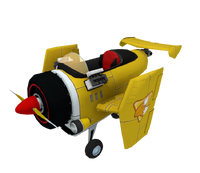