A heated battle zone in the sky

Tornado Defense (トルネードシュート, Torunēdoshūto?, lit. "Tornado shoot") is a mini-game from the Xbox 360/PlayStation 3 version of Sonic Unleashed, played from Sonic's point of view whilst riding on Tails' Tornado-1. The objective of the level is to fight off enemy aircrafts as they attack the player, similar to Sky Chase. Sonic must fight the boss Egg Cauldron at the end of this level.

At this point in the game, Sonic and Tails must head to Spagonia to meet up with Professor Pickle. It normally wouldn't have been possible to get to the continent, due to the fact that the planet was broken at the time. However, they decided to take the Tornado on a short flight to their destination. The duo was then attacked by Eggman's robot fleet in an attempt to cross the border to Spagonia. This Act can be played in Rooftop Run.

At a much later point in the game, Sonic and Tails are en route to Eggmanland to restore the last continent. As one might predict, they encountered Eggman's robot fleet once more as they entered the airspace. This Act can be played in Eggmanland.

Sonic needs to shoot down Eggman's robots and their attacks as they fly towards him through the use of Real-Time Interaction shown on-screen. Pressing the specified button will destroy the highlighted target. Sometimes, the player may need to press multiple buttons in a sequence to destroy a group of enemies at once. If the player simply mashes all of the buttons with disregard, the Tornado will lose energy and be unable to fire any more projectiles for a second or two, leaving Sonic and Tails vulnerable to attack. To quickly recover from this, the player may press

in an alternating sequence (That is

, etc.) The Tornado has a health bar, labeled as Shield that will decrease each time it suffers damage from enemy attacks. If the Shield reaches zero, the player will lose a life and will have to restart the entire act from the beginning. There are three types of enemies;

Additionally, enemies can sometimes appear in a group, which requires a button sequence to be inputted that will destroy all of them and grant a massive amount of points. 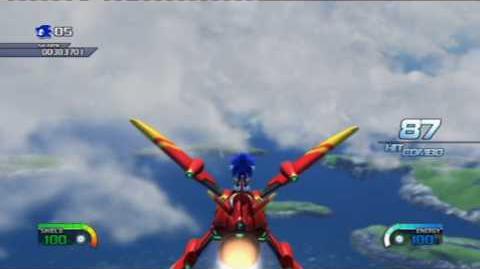 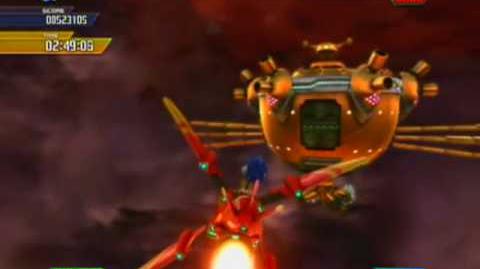