The Tornado 2, from Sonic Adventure.

An upgraded version of the Tornado which is able to become a jet plane.

The Tornado 2[1] (トルネード2[2], Torunēdo Tsū?) is a vehicle that appears in the Sonic the Hedgehog series. is an upgraded version of the original Tornado, built by Miles "Tails" Prower after the original biplane was shot down during the Chaos incident. The most known feature of the Tornado 2 is to fold its wings into an X-shape and transforming into a different shape for the plane's tail. This gives extreme speed for the plane once doing this.

The Tornado 2 comes in two distinct forms: its standard plane form and its jet plane form. In its standard plane form, the Tornado 2 resembles a biplane with bluish-purple wings and fuselage. It possesses a lone cockpit in the fuselage with a single seat in it (although it has occasionally been expanded to two seats) and a small windshield on the front. It also has a three-headed black tractor screw with yellow blade tips and blade root, a black power plant, and three wheels, with two under the lower main wing and one below the empennage. Also, above the top wing and vertical stabilizer, the Tornado 2 is emblazed with Tails' symbol and behind the cockpit on the fuselage is the word "SONIC" written in white and with a red underline below it. It possesses as well yellow edges on the front of its wings and around its power plant's edge on the fuselage, a yellow line down the sides of said fuselage, and yellow elevators on the vertical stabilizers. Lastly, it has red-tipped wings and horizontal stabilizers.

In jet planet mode, the Tornado 2's shape is slightly altered. Its four wings has been rearranged into an X-shape, its tractor screws and wheels have retracted, and the lower half of its fuselage have been raised to give room for a rocket booster on the bottom of its fuselage.

Implied to be superior to the original Tornado, the Tornado 2 is capable of flight, speed and maneuverability that makes it a match for hordes of airborne Badniks and the original Egg Carrier's array of weapons. In terms of armaments, the Tornado 2 is equipped with machine guns and powerful homing missiles.[2]

When extra maneuverability and speed are needed, the Tornado 2 can alter its wings into an X-shape to become a jet plane. It also comes equipped with a retractable robotic arm that can hold any passenger outside the cockpit while it switches mode. However, due to an oversight by Tails, the Tornado 2's jet plane mode comes with the drawback of having no landing gear,[3] which led to a painful landing during the Tornado 2's maiden voyage.

In Sonic Adventure, its enhanced port Sonic Adventure DX: Director's Cut, and the 2010 remaster, Tails designed the Tornado 2 after the original Tornado was damaged during a failed attempt to go to the Egg Carrier. At the Mystic Ruins, he found a Chaos Emerald, which he used to finish the plane. Afrer that, Tails and Sonic went to chase the Egg Carrier yet again. This time, they were more successful, as the Tornado 2 was capable of folding its wings into a X-shape to reach extreme speeds. After the duo crash-landed on the Egg Carrier due to a lack of landing gear, the Tornado 2 was found by Big the Cat and flown to Mystic Ruins, where it crash-landed again. After this, Chaos found it and stole the Chaos Emerald from it, largely wrecking the already damaged plane.

In gameplay, the Tornado 2 is only used during Sky Chase Act 2. Here, it will automatically move forward, usually making turns while progressing. Like with the original Tornado in Sky Chase Act 1, the player can move the Tornado 2 across the screen. This will also move a target that will follow the plane. Also, by pressing the action button, the Tornado 2 will release some energy projectiles that will destroy anything they touch, granting the player points. However, if the button is held down, the enemies that are touched by the target will be locked-on. When the action button is released, missiles will come out of the Tornado 2 and attempt to reach the targets. This is a more effective way to destroy various enemies at once and get various points, and can be used to destroy enemies that cannot be reached by the energy projectiles. However, the Tornado 2 is vulnerable to attacks and has a life gauge that drains by every hit; if the gauge is fully empty, the player will lose a life.

In Sonic Heroes, Tails flies the Tornado 2 in the beginning of Team Sonic's story, with Knuckles in the (apparently new) back seat. The Tornado 2 is in its X-shape used to catch up to Sonic and give him an important message from Eggman. After Sonic throws away the message, Tails and Knuckles jump out of the Tornado 2 and follow Sonic on foot, with the Tornado 2 flying off-screen, possibly on autopilot. Due to the lack of a Chaos Emerald on the Tornado 2, it can be assumed that Tails perfected its design and it no longer requires an Emerald to work correctly.

In Sonic Advance 3, the player rides atop the Tornado 2 (now with a landing gear) in Special Stages, maneuvering up, down, left and right to collect the required number of rings. The plane can also temporarily transform into its X-winged configuration by flying through blue portals, increasing the plane's speed, increasing the value of each collected ring times two, and leaving the player's character comically holding onto the plane for dear life. Failure to collect enough rings at either the halfway mark or at the end results in the Tornado throwing the players' character off and spinning off the screen out of control.

In Sonic Riders, the Tornado 2 is seen towards the end of the Hero Story, when Eggman steals the Key to Babylon Garden and flies to the Babylon Garden. Tails flies the Tornado over to the island, while Jet the Hawk controls the large Babylon Airship. Knuckles is sitting in the second seat, and Sonic is standing on the wings. Sonic heads down to catch Eggman, but Tails hands him a new Gear first.

In the anime series Sonic X and its comic series published by Archie Comics, the Tornado 2 originally belonged to Sonic the Hedgehog who passed it onto Tails after the fox upgraded it. It was used in many of Sonic and his allies' battles with Dr. Eggman, but would eventually be replaced by more advanced aircrafts like the X Tornado.

In the Sonic the Hedgehog comic series and its spin-offs published by Archie Comics, the Tornado 2 was originally just another iteration of the Tornado, but would later become its own aircraft after the storyline was rebooted.

An agile biplane, the Tornado was perhaps the most famous of the Knothole Freedom Fighters' vehicles. Tails took the position of the pilot, maintaining his place since the earliest versions of the Tornado. Armed with short range homing missiles, twin blasters and a massive thrust engine, it could take on even the fighters of the G.U.N. air force. Throughout the series, the Tornado went through many iterations.

After the Super Genesis Wave reset the multiverse, the Tornado 2 became virtually identical to its game counterpart, although it remains a primary vehicle in the Freedom Fighters's air forces.

In the Sonic the Hedgehog comic series and its spin-offs published by Archie Comics, the Tornado 2 is a biplane used by Tails. Its past is virtually identical to its game counterpart's up until after the events of Sonic Forces. 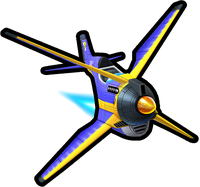