The Tornado, from "Sonic and Tails".

A red and white colored biplane.

The Tornado (トルネード, Torunēdo?) is a vehicle that appears in the Sonic the Hedgehog series. It is an alternate version of the Tornado from another dimension set in the recent past. Like its counterpart, it is a biplane used by Sonic the Hedgehog and Miles "Tails" Prower.

The Tornado is an old vintage biplane with a red fuselage and two grey main wings attached with a pair of poles on both sides. The red fuselage has a power plant with a grey tractor screw and the word "SONIC" written in white on both sides with stretchy F-letter labels underlining them. The cockpit has only one seat. Its empennage has two small horizontal stabilizers and one vertical stabilizer, the latter emblazoned with an emblem of a Bumper with wings. It also has three wheels, two under the lower main wing and one below the empennage. Occasionally, the Tornado has a custom jet engine on the bottom as well.

The Tornado can increase its speed to 450 kilometers per hour.[1] With its custom jet engine bolstering it, the Tornado can keep up with large space shuttles. As shown during the Angel Island incident, the Tornado can also be fitted with a grappling tether for pulling larger objects behind it.

In Sonic Mania, and its expansion Sonic Mania Plus, some time after Angel Island was saved by Sonic and Tails,[2] the Tornado was used by the aforementioned duo to reach Angel Island in order to investigate an energy source. They later employed it for chasing after Dr. Eggman in Mirage Saloon Zone, accompanied by Knuckles. However, Knuckles got knocked off the Tornado when the Heavy Magician intercepted them, leaving Sonic and Tails to continue their hazardous trip through the air alone. Not long after, the Tornado got shot down by the Heavy Magician.

Artwork for the 42nd anniversary of the Pac-Man franchise. Art by Mark Hughes. 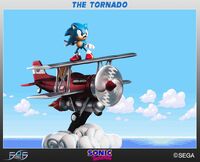