The Tornado-1, from the console/PC version of Sonic Generations.

An upgraded Tornado biplane with futuristic design and transforming wings into an X-shape.

My Tornado-1 will get us there in a flash! Let's get going!

Leave it to you, Tails! Let's get moving!

The Tornado-1 (トルネード号, Torunēdo-gou?) is a vehicle that appears in the Sonic the Hedgehog series. It is a biplane owned by Miles "Tails" Prower and is presumably based on both of the previous Tornado and Tornado 2 biplanes, but upgraded with better designs.

In Sonic Unleashed, Tails offers Sonic the use of his Tornado-1, although this is not to be confused with the original Tornado. It is a newly-built Tornado plane with a more futuristic design. This plane has writing that reads "Tornado 03" near the rear, which can be seen when it transforms during both of the Tornado Defense Acts of the Xbox 360/PlayStation 3 version. The Tornado-1 also combines features of previous Tornado incarnations: the red paint job and outward construction of the original Tornado, the ability to transform into an X-shape like the Tornado 2 and the homing missiles found on the Cyclone from Sonic Adventure 2.

Story-wise, the Tornado-1 is first shown parked near the coastline in Apotos, where Tails had landed for the sake of gathering some data on the situation of the planet breaking apart. Upon finding Sonic and Chip, the plane is then used to reach the various continents across the globe. Later on, Tails uses the Tornado-1 to drop Sonic and Chip off at Eggmanland and is shown to be hovering over it during the rest of the game. Shortly before the Egg Dragoon come and ambushes Sonic, the Tornado-1 gets knocked off course by unknown means, and is sent spiraling off in a set direction. Despite the setback, Tails manages to get the plane back on course and is shown flying after Sonic during the ending cutscene.

The Tornado-1 has made a brief appearance in Sonic Generations, where Modern Tails once again uses this version of the plane to race against Modern Sonic in the Challenge Act "Tails: Way Past Fast" in Green Hill. During the whole Challenge Act, Tails uses its normal biplane mode and not its enhanced Battle Mode transformation.

In Speed Highway, one of the billboards on buildings is featuring the Tornado on its standard form with a slogan "faster than airmail". It is also shown on a billboard that is advertising for "SONIX Delivery Service".

The Tornado-1 makes a cameo in Mario & Sonic at the Sochi 2014 Olympic Winter Games in one of the bobsleigh event set in Speed Highway. It can be seen on a billboard that reads "faster than airmail", which almost is identical to billboard advertisement from Sonic Generations. 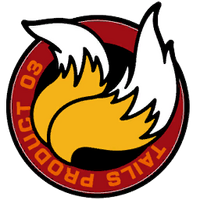 Tornado-1's icon.
Add a photo to this gallery