Tomy is a UK toy company that has produced Sonic the Hedgehog toys over the years.

Tomy's first Sonic toy line was in the 1990s. After over 10 years of not being involved with the series, in 2010 Tomy attained the Sonic license again and distributed Jazwares' Sonic the Hedgehog toys from the US to the UK. Tomy then worked with Gacha to make various gacha Sonic toys. In 2014, it was confirmed that the Sonic Boom would have an entire toyline devoted to the cartoon. The rights of the toy making was handled by Tomy.[1] In 2016, Tomy announced that they would make merchandise for the Sonic the Hedgehog 25th Anniversary. This included plush toys and figures of the Classic style brand. In 2017, Tomy released the Sonic the Hedgehog's Collectors Series which contained figures of characters from both the Modern and Classic Sonic series brands. 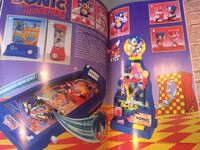 Pg. 48
Add a photo to this gallery

A set was made of four figurines, which included two Sonics, Tails and Dr. Robotnik. The figurines were small, painted and had no articulation. A bendable figure of Sonic was also made, labeled as a "Flexi Friend".[2]

After the release of Sonic & Knuckles, Tomy released a series of 20 Sonic figurines.[3] These figurines came in a total of five packs of four under the Sonic & Knuckles brand.[4] These were released in Europe, Japan[5] and possibly the US.

Sometime around 1996 or 1997 at SegaWorld London, a set of four figurines were available in a Sega themed box.[6] The original set contained three Sonic figurines and a Metal Sonic, all of which were included in the previous Sonic & Knuckles series. The box was decorated with various Japanese and British Sonic stock art.

After Sega World Sydney had opened, the set was available there too. It was common for the box to contain four Sonics (two of the four being the same), instead of just three Sonics and one Metal Sonic though.[7]

It was announced that the Jazwares Sonic figures would be distributed in Europe by TOMY. The pictured banner confirmed 3 of the Super Poser figures. TOMY had announced the following sets of figures to be released in 2010:

In promotion of the European version of the game Sonic Colors for the Wii and Nintendo DS, TOMY released a five-inch Sonic action figure that came with three Wisps. It was released along side the game in November of 2010. The figure could be bought along with the game in a "Special addition pack". The figure came with different wisps depending on what version of the game was purchased. The Wii version came with the white, orange and cyan wisps. The DS version came with the yellow, red and blue wisps. The Sonic figure has holes in his hands and the Wisps have pegs on the back of them, you can put the pegs onto the Sonic figure's hands to hold them.

Around 2011, Gacha and TOMY teamed up to make Buildable Figures, Disk Shooters, Sonic & Sega All-Stars Racing Pull-Backs, a set of Danglers (full-body and head danglers), and a set of Magnets.[9] Like typical Gacha brand toys, these come in round plastic containers with 4 small holes on the top and bottom. Choosing which of the characters you are buying is close to impossible.

Sonic, Shadow and Knuckles were re-released from the Pull-Backs series for the Racers series in promotion of Sonic & All-Stars Racing Transformed. Due to the original releases being based on Sonic & Sega All-Stars Racing, Shadow is incorrectly with the Dark Rider instead of the G.U.N. Auto Tread, and Sonic and Knuckles are with the old versions of their vehicles.

The main toyline for Sonic Boom was handled by TOMY and was set to release in late 2014. The main toyline has been Sonic the Hedgehog, Miles "Tails" Prower, Amy Rose, Knuckles the Echidna, Sticks the Badger, Dr. Eggman, Lord Eggman, Metal Sonic, Orbot, Cubot, Burnbot, Bee Bot, Crabmeat, Motobug, and Shadow the Hedgehog.

So far (as of 2018) The figure line up has 3-inch figures of Sonic, Tails, Knuckles, Amy, Sticks, Eggman, Shadow, Metal Sonic, Orbot and Cubot as well as many variants of the said figures. Some variants include metallic variants, different head gear, and new paint jobs.

In 2016, in celebration of the Sonic twenty-fifth anniversary, Tomy released both figures and plushes of Classic styled Sonic characters.[10] They weren't specifically labelled as Classic versions of the characters, however. The characters in this series include Sonic, Tails, Knuckles and Dr. Eggman.

Tomy released five plushes in total, including Sonic, Tails, Knuckles and Dr. Eggman. Four of the plushes are shiny/metallic as they use a crushed velvet material, and retailed for $14.99 each. The fifth plush is a much larger, regular Sonic.

As a part of the 25th anniversary series, Tomy also released three 3-inch figures of Classic Sonic, Tails, and Knuckles. They were available in 3 different options; single-packs, comic 2-packs and a special 3-pack. The 3-pack had the figures in a shiny metallic finish, much like their plushie counterparts. They even included 3 golden coins with artwork of each character.

In December 2016, Tomy's 2017 catalog released and showed a new wave of upcoming Sonic toys, known as the Sonic the Hedgehog Collector Series.[12][13] The line consisted of toys from both the Classic and Modern Sonic the Hedgehog series brands.

At the end of 2017, Tomy's 2018 catalog released and revealed more upcoming toys from the Collector Series, including new figures and plushies.[14]

The 2018 line-up had a special 5-inch figure that was similar to Good Smile Company's Sonic Nendoroid, as it had many accessories and features. 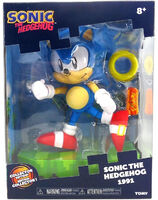 Ultimate Sonic figure
Add a photo to this gallery

In 2017, Tomy added Comic 2-packs to their Collector Series lineup. A Comic 2-pack would consist of two figures, being a Classic and a Modern version of a character, as well as a comic book relating to the character.

Six initial packs were revealed in Tomy's 2017 catalog. Four of the packs were two different versions of a Sonic pack and a Knuckles pack, as both had different comics. Eventually only one of each of the Sonic and Knuckles packs released, both with a comic by Archie Comics. 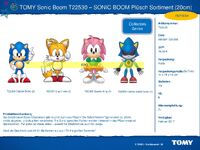 Concepts of the un-released Classic Amy and Metal Sonic plushes. 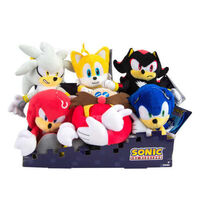 The final set of 8-inch plushes.
Add a photo to this gallery

The 2018 catalog previewed upcoming packs which would include two figures and a metallic collector plate with unique artwork. The two packs were of Classic and Modern Amy and Classic and Modern Dr. Eggman. Due to Tomy losing the Sonic license in 2019, the packs never released.

In September 2017, a listing for a "Sonic Forces Figure Pack" leaked on GameStop's website.[16] There was no image or information about the pack, however shortly after the leak was discovered, Tomy confirmed the pack would contain four figures and exclusive lithographs for Sonic Forces, and would release after the game.[17]

Two months later, the pack released and the figures contained were re-releases of Sonic and Knuckles from the Collector Series Comic 2-packs, and a second re-release of the Classic Sonic figure.[18] The pack did however include Tomy's first modern Tails figure.

An advertisement for the pack after its release, posted on Tomy's Facebook page.[19]
Add a photo to this gallery

Club Mocchi- Mocchi- is a line of plush toys designed to have a unique squishy texture and be super soft to the touch. As part of the 30th anniversary of the Sonic series in 2021, Sonic and other characters will be released as part of the collection, with the first item being a "Mega" 15-inch plush of Sonic's head.[20][21]