Tomoya Ohtani (大谷 智哉, Ōtani Tomoya?) is a composer who has worked for Sega. He has made music for various Sonic the Hedgehog games, and has had the position of sound director multiple times.

Tomoya Ohtani joined Sega in 1999, with ChuChu Rocket! being the first game he composed music for. The first Sonic the Hedgehog game he worked on was Sonic Adventure 2 in 2001, when he composed several tracks under the direction of Jun Senoue. He was given the position of sound director for the first time for Sonic the Hedgehog (2006), and continued to serve as the sound director for Sonic Unleashed, Sonic Colors, Sonic Lost World and Sonic Forces. He also worked with Senoue on remixing past tracks for Sonic Generations.

Outside of Sonic, Ohtani has composed music for a range of other Sega games. Examples include Space Channel 5: Part 2, Billy Hatcher and the Giant Egg, Phantasy Star Online Episode III: C.A.R.D. Revolution, Sega Rally 2006, and NiGHTS: Journey of Dreams. He was also the sound director for Super Monkey Ball: Step & Roll and Rhythm Thief & the Emperor's Treasure. 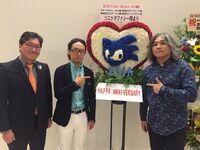