Tommy Turtle was a childhood friend of Sonic the Hedgehog and Sally Acorn. He later became a member of the Knothole Freedom Fighters. Tommy became a member of the brain trust along with Tails and Rotor, assisting with the planning and creation of inventions. Tommy became a pawn for Dr. Eggman Robotnik's "son" A.D.A.M. after coming into contact with the nanites. A.D.A.M. assumed control of Tommy and nearly succeeded in capturing all of the Chaos Emeralds in the universe. However, Tommy managed to temporarily resume control of his body and allowed the Egg Fleet to kill A.D.A.M. and himself.

Prior to Dr. Ivo Robotnik's military coup, Tommy was friends with Sally Acorn in the city of Mobotropolis when the two were five years old. Sonic originally picked on Tommy often due to the turtle's slow speed, but when Tommy finally stood up for himself and challenged Sonic to a foot race, everything changed. Tommy won the race after Sonic fell asleep right before the finish line, never expecting Tommy to catch up before he awoke. After that, Sonic had a new appreciation for Tommy. However, Robotnik launched his coup the following day, with everyone believing Tommy to have been captured and roboticized.

Almost eleven years later, NICOLE picked up a distress call from Tommy asking for help. Apparently located in the Forbidden Zone, Sonic disguised himself as a hare named "Juice" and went to rescue Tommy. Upon arriving at an abandoned factory, Sonic discovered Tommy was not alone, accompanied by the Destructix. Sonic soon discovered that Sleuth "Doggy" Dawg had used Tommy to lure Sonic into a trap where they could present him to Dr. Eggman. After the Destructix (except Sleuth) were roboticized, Sonic grabbed Tommy and made for an escape. Sleuth threw a grenade just before being roboticized, and Tommy decided to push Sonic out of the factory's window allowing him to survive the blast. Sonic believed Tommy to have died in the explosion and left.

One year later, after Sonic's return from outer space, the Freedom Fighters again received word that Tommy was alive. Sonic returned to the Forbidden Zone where he found Tommy. The two were attacked by what appeared to be the roboticized Destructix, but in reality were robotic recreations made by A.D.A.M. to deceive everyone. Sonic brought Tommy back to Knothole, only to soon realize that the Tommy he brought back was an Auto Automaton. The robot version of Tommy severely damaged Sonic's father Jules, who was trying to protect his son. Sonic destroyed the robotic duplicate of Tommy and used a Power Ring to restore his father back to health. Afterwards, Uncle Chuck informed Sonic that Eggman was behind the plot, and that Tommy may still be alive.

Sonic went with the Knothole Freedom Fighters to New Megaopolis where they discovered Eggman was manufacturing thousands of Auto Automatons (now called "Infiltrators"). Sonic managed to locate the actual Tommy just before he was executed by a SWATbot. The group managed to destroy the facility and safely bring Tommy back to Knothole Village.

Member of the Freedom Fighters

After spending some time in Knothole, Tommy found himself depressed since everyone was too busy to spend time with him. However, when Rotor discovered that Tommy was both well organized and intelligent, he offered to teach him everything he knew and bring him into the Knothole "Brain Trust". From that point on, Tommy became a member of the Freedom Fighters.

Following this, Tommy accompanied the Freedom Fighters to discover what was causing a massive amount of seismic activity. The group ended up discovering an ancient facility where Shadow the Hedgehog was trying to find out answers about his past from a twelve-thousand year old robot Isaac. Originally Tommy remained with Tails in the facility's control room, but he eventually left to see if the others needed help. When Fiona Fox, Rotor and Bunnie Rabbot were being electrocuted, Tommy managed to shut the power off, saving their lives. Eventually it was discovered Isaac was attempting to fire a nuclear missile. Sonic and Shadow managed to disarm it, and the group fled back to Knothole.

Some time later, while the Brain Trust was examining the nanites, Tommy found himself feeling sympathetic to the tiny machines. When he believed Snively had "killed" them, Snively simply retorted that they were robots and not alive, to which Tommy disagreed. After the Brain Trust members left, Tommy remained behind to examine the nanites. A tear drop from Tommy interacting with the nanites resulted in their revival, and the nanites proceeded to latch onto Tommy, covering his shell. From there, Tommy managed to manipulate he nanites into turning into whatever he wanted, including wings and a jet pack.

Weeks later, Tommy began exhibiting unusual behavior. At this point in time, Eggman's computer "son" A.D.A.M. had transferred his consciousness into the nanites to prevent himself from being deleted when Eggman discovered him to be the mysterious Anonymous. From there, A.D.A.M. initiated his plan to bring all of the Chaos Emeralds in the universe to Mobius where he would use their powers to defeat Eggman's enemies. A.D.A.M. used the nanites on Tommy to control his body and spread the nanites to others, including NICOLE, Bunnie and Jules. From there, A.D.A.M. used his control over Tommy to defeat Shadow and the nanites on Jules to carry an unconscious Tails to his Chaos Spire. Using the power of Turbo Tails and Shadow's Chaos Control, he lured all of the Chaos Emeralds to Mobius.

When Sonic arrived on the scene, A.D.A.M. took advantage of his host's body by exposing Tommy so that Sonic wouldn't hurt him. The nanite-covered Tommy and Sonic battled for a time, until Tommy finally managed to gain control over the nanites temporarily. Realizing there was no other way to stop A.D.A.M., he flew towards the Egg Fleet and allowed himself to be obliterated, his remains little more than ash.

Tommy's ashes currently rest at Knothole Graveyard, beside Sir Connery. However, the graveyard's status is unknown, with the recent destruction of Knothole. The hospital in New Mobotropolis is named in his memory.

Tommy with a mad facial expression. 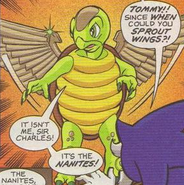 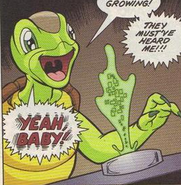 Tommy is selfless and willing to sacrifice his own well-being for his friends. While generally naive and timid, Tommy has also displayed signs of great courage, as seen when he sacrificed his life to save Sonic.

Tommy has green skin, blue eyes and a brown shell.

Retrieved from "https://sonic.fandom.com/wiki/Tommy_Turtle?oldid=829271"
Community content is available under CC-BY-SA unless otherwise noted.