Sonic and Tails in Titanic Monarch Zone, from Sonic Mania.

The Zone is the secret base of the Hard Boiled Heavies and Dr. Eggman and hosts a colossal robot. As with most other Zones in Sonic Mania and Sonic Mania Plus, Titanic Monarch Zone is composed of two Acts, with a boss fight at the end of both.

The Titanic Monarch Zone is a high-tech metropolis. In the center of it stands the "Titanic Monarch", a gigantic mech that resembles a cross between the Death Egg Robot and the Heavy King.

Act 1 takes place outside the Titanic Monarch during nighttime. At the bottom of the Act, the background shows skyscrapers that are lit up by light blue lights. As the player get higher up however, they get above the skyscrapers in the background where the lights are weaker. Even further above is a clouded night sky with the moon visible on it. The foreground on the other hand consists of metallic red roads with red banners depicting the emblems of the Eggman Empire and the Hard Boiled Heavies. Along the roads are also various technological and/or mechanical contraptions. Also, in-between the foreground and background is the Titanic Monarch, which looms over the foreground like a giant shadow.

Act 2 is set inside the Titanic Monarch. This area resembles a mix between the mechanical insides of one such a machine, with all of its inner components present, and a cathedral with stained-glass windows in the background that depict the Hard Boiled Heavies, the Chaos Emeralds, Dr. Eggman and the Phantom Ruby.

After a long chase, Sonic, Tails and Knuckles have found Dr. Eggman in the Titanic Monarch Zone, which contains a gigantic robot ready to be brought online. The heroes make their way into the heart of the giant robot where they arrive before Eggman, who is ready to crush Sonic and co. once and for all in his Phantom Egg, a mech suit that incorporates the Phantom Ruby itself. To make matters worse, Eggman is using his mech suit's powers to force Sonic and co. into rematches with the majority of the Hard Boiled Heavies, which have now been upgraded into Phantom Heavies.

Following a hard-fought battle, Sonic and co. manage to destroy Eggman's Phantom Egg, thereby triggering a chain reaction that is about to make the Titanic Monarch explode. Upon Eggman's defeat however, the Phantom Ruby triggers, causing Sonic and his seven Chaos Emeralds to be sent to another dimension with Eggman and the ruby. Soon after, the Titanic Monarch and its Zone is destroyed.

Having chased Dr. Eggman across several Zones, Sonic, Tails, Knuckles, Mighty and Ray find themselves in Titanic Monarch Zone - a previously-destroyed Zone with the gigantic Titanic Monarch robot that Dr. Eggman has rebuilt and made ready for deployment standing in the middle of the Zone. The heroes make their way inside the Titanic Monarch where they find Eggman, armed with his rebuilt Phantom Egg, a mech suit that harnesses the Phantom Ruby's power itself. To make matters worse, Eggman is using his mech suit's powers to force Sonic and co. into rematches with the majority of the Hard Boiled Heavies, which have now been upgraded into Phantom Heavies.

In the end, Sonic and his friends defeat the Eggman and his mech suit. Upon Eggman's defeat however, the Phantom Ruby activates, creating a space-time rift that begins sucking in the surroundings, including the Titanic Monarch. Eggman tries to escape the rift on a jet sled. However, he ends up getting knocked into the rift by Super Sonic, Super Tails, Super Knuckles, Super Mighty and Super Ray when the group of Super State users escape the rift.

The Titanic Monarch Zone focuses on gimmick mechanics that help reach higher areas, like magnetic plasma spheres that fling the player, bumper walls, and Springs that suddenly pop out from different surfaces.

The Acts have several rocket cars piloted by Egg-Robos that will jet forward once the player jumps into them. These cars will accelerate wildly until they crash into a wall, which will destroy the cars while the player is tossed out without taking damage. The Zone also features sets of twin poles that produce electrical currents periodically. Such electrical currents inflict damage upon touch. However, if the player is equipped with a Lightning Shield, these currents will instead harmlessly magnetize the player.

Act 1 and 2 share many of the same gimmicks and obstacles. Exclusive to Act 2 however, are the Ruby Mists, purple hazes that teleport the player to different areas within the Act.

Act 1 takes place in the roads and skyscrapers outside of the gigantic mech. This level has the unique trait of being taller than it is long, which is fitting for a level which involves scaling the roads and entering the robot through the top. Upon reaching the top of the level, the player fights the Crimson Eye and enters the Titanic Monarch itself upon the sentry's defeat.

Act 2 takes place inside the Titanic Monarch. This act introduces the Ruby Mist. Upon reaching a certain point, progress becomes nonlinear, as the player will arrive in a large central area with four passages leading to four corresponding areas that loop back to the central area. At this point, the player must go through each of the four areas in any order they choose. Once all four areas have been cleared, a wormhole will appear in the central area, teleporting the player to the final boss fight.

The boss of Titanic Monarch Zone Act 1 is the Crimson Eye, the successor to the Red Eye. In the first phase, the player must hit it in the eye while avoiding the large exploding spheres that orbit it. Hit it eight times to move onto the second phase. The elevator lift the battle takes place on will then begin to move up and down dramatically, which affects the gravity inside the elevator. The Crimson eye, now detached, will float around the arena, then lodge itself on the floor/ceiling and fire out ricocheting energy balls. Hit it another eight times to end the fight.

The boss of Titanic Monarch Zone Act 2, and the penultimate boss of Sonic Mania, is the Phantom Egg, a Phantom Ruby-powered mech suit with tethers piloted by Eggman. The battle begins with the Phantom Egg shielding itself before bouncing around the arena while firing missiles. Eventually, it will land and electrify his tethers. When the electricity expires, it can be hit. After this, Eggman will transport the player to a short battle with one of the Phantom Heavies. It should be noted, however, that the player cannot defeat the Phantom Heavies during these encounters. After these battles, the character will return to the battle with Eggman and resume fighting him.

Due to the second act's potentially exhaustive length, arriving in the battle against the Phantom Egg will reset the Zone timer as the battle itself is of a considerable length on its own.

In most situations, the battle ends with the Phantom Egg blowing up along with the Titanic Monarch while the characters escape from the destruction. However, if Sonic has all seven Chaos Emeralds and beats the Phantom Egg in Mania Mode, the Phantom Ruby will engage and warp him and Eggman to the Egg Reverie Zone. 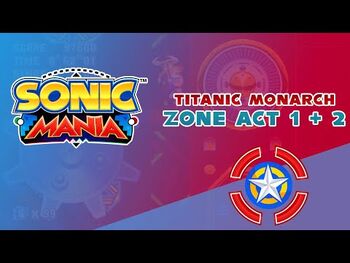