The seven Time Stones, from Sonic the Hedgehog CD.

The Time Stones, mysterious stones found somewhere on Little Planet. It is said that those who get the Time Stones will be given the power of miracles. When Sonic collects the seven Time Stones...?

The Time Stones[2][3] (タイムストーン[4], Taimusutōn?) are objects that appear in the Sonic the Hedgehog series. They are seven gemstones that lie dormant on Little Planet, and have the power to control time.

Overall, the Time Stones are depicted as seven hexagonal stones that come in the colors red, orange, yellow, green, blue, purple, and cyan. Their size, however, has been rather inconsistent; when Sonic was obtaining them, they were shown to be about the size of the hedgehog's head, while in a possible event of the Little Planet incident, they were small enough to fit inside of Dr. Robotnik's palm.

The Time Stones have the power of freely controlling time to perform amazing wonders, like transforming a desert into a jungle, and turning a polluted lake into a beautiful one;[4] just one Time Stone can be used to make impressing actions, like transporting entire planets across spacetime and restore the state they had at some point in the past. Additionally, with all seven Time Stones in hand, the user is able to command time itself[3] in order to cause miracles to happen.[1]

In Sonic the Hedgehog CD, the Windows 95 version, and the 2011 remaster, Dr. Robotnik attempted to collect the Time Stones in order to take over Little Planet and the rest of the world. However, Sonic ended up finding them first instead.[4]

In the Sonic the Hedgehog television series, there were two Time Stones. They were found on the Floating Island, safeguarded by several forces. Sonic and Sally tried using them to go back in time and prevent Dr. Robotnik's takeover of Mobotropolis, but the plan failed.

In the Sonic the Comic comic series and its spin-offs published by Fleetway Editions, there are only six Time Stones rather than seven (at the time, the series also included only six Chaos Emeralds). Their appearance was also somewhat inconsistent as they were both presented as gemstones and regular-looking oval rocks.

Hidden on the Miracle Planet, Dr. Robotnik eventually found a Time Stone and used it to cyberform all of Miracle Planet. As a part of a bizarre time paradox however, Sonic was able to use a Time Stone to undo Robotnik's work by changing history.

After the Super Genesis Wave reset the timeline, the Time Stones became nearly identical to their game counterpart. 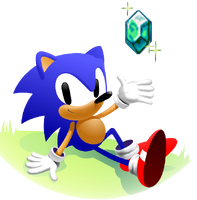 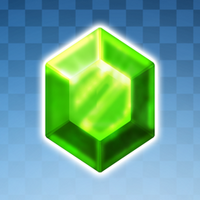 "Treasure Hunter" achievemnet, from the 2011 remaster of Sonic the Hedgehog CD 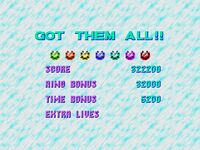