The final confrontation takes place in an infinite tunnel dimension,[1] where the player controls both hedgehogs in their respective Super States. It takes 4 hits to defeat in console/PC version, while it takes 8 hits in the Nintendo 3DS version.

The Time Eater (タイム・イーター, Taimu Ītā?) is the final boss of the console/PC version and Nintendo 3DS version of Sonic Generations and is fought with both Classic and Modern Super Sonic. On both versions, it can first be fought after beating the semi-final boss and collecting all the Chaos Emeralds.

When facing the Time Eater, the player has control of both Classic and Modern Super Sonic (most of the boss battle is done in 3D style). The battle area is cluttered with objects from Sonic's history which can slow the player down should the Sonics ram into them. Depending on the Sonic the player is using, the player can use either the Atomic Spin or the Super Sonic Missile to sweep away obstacles.[2]

The battle begins with the Sonics chasing Time Eater through a time wormhole, trying to maintain a distance from them. Its most used attack is a wave of homing missiles that homes in on the player.[3] However, this attack is fairly easy to avoid as it is not very fast and Sonic does not lose Rings when he is hit. Sometimes, the Time Eater dives outside the wormhole.[4] When this happens, switching to Classic Super Sonic (by pressing

) will push the two hedgehogs outside the wormhole as well and shift the camera to 2D.[5] Another Time Eater attack includes warping its upper arms off its body and launching them through Time Holes to attack Sonic.[6] However, this attack is also slow and easy to avoid.

To defeat the Time Eater, the player must attack into its core, signaled by a lock-on target when in range.[7] When the core cracks, Rings will spew out briefly. After the first two hits, the Time Eater will lose its lower body limbs which will be replaced by black smoke. It also gains a new attack: a giant laser that charges before firing, which can only be dodged by switching Sonics at the last second.[8] Also, the Time Eater can slow down time around both Sonics, allowing it to fire a huge wave of Homing Shots before time returns to normal.[9][10] Also, it can shoot out two purple rings that will home in on and immobilize the Sonics if they hit, making a co-op attack or switching characters impossible until the captured Sonic is freed.[11]

Once Time Eater's core has been hit three times and the player is in the same section of the wormhole where the Time Eater is at, it launches a giant flaming fireball at the Sonics that is too big to avoid. The only way to counter this is to press both

at the same time to combine the Super Sonics' powers, bursting through and striking at Time Eater's core, subsequently finishing the fight.[12] If the player releases the buttons too early, the player will be repelled back and the Time Eater will eventually attempt to use the attack again.

In the Hard Mode version of this battle, it will be harder to catch up to the Time Eater, there are more obstacles to avoid, and the Time Eater can now shoot out three waves of Homing Shots instead of one if given enough distance. In addition, it takes longer to strike the core with the last attack. For the beginners, it is recommended to use Classic Super Sonic to collect Rings which is easier.

In the Nintendo 3DS version, the battle is fought differently. The player cannot switch at will between Classic and Modern Super Sonic, and the Time Eater takes eight hits to defeat instead of four. The player also starts with 100 Rings.

This is repeated another three times. In each round, the Time Eater adds a new attack (for Classic Super Sonic, a weak laser attack and a much stronger laser burst, and for Modern Super Sonic, a warping arm attack and a clock shield which he must boost through without hitting the clock face's spinning hands or its edges), as well as modifying its existing attacks (such as firing more homing shots, or moving faster with its warping arms).

On the eighth round, Time Eater and the two Super Sonics fall through a wormhole. To finish the battle, the player must boost and home towards Time Eater, streaking one last time through its core. 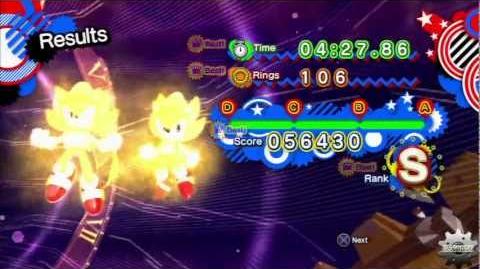 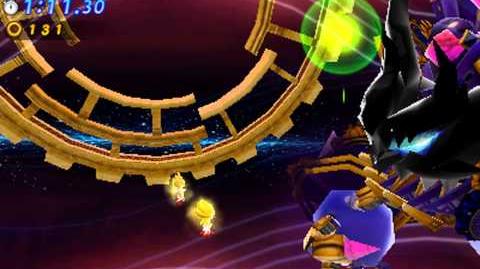