Sonic in Tidal Tempest, from the 2011 remaster of Sonic the Hedgehog CD.

As you dive into this underwater adventure, remember that you'll need air once in a while. If you go too long without it, a countdown appears. When the countdown reaches zero, you lose a Life.

Take a deep breath from air bubbles that drift up from certain blocks. Switches activate propellers, and the current will send you spinning. Grab onto the nearest pole to save yourself from steel spikes!

Tidal Tempest (潮の嵐[2], Shio no arashi?) is the third Round in Sonic the Hedgehog CD. It consists of a cave region, located on Little Planet. As with the other Rounds in the game, Tidal Tempest consists of two Zones and a third, shorter Zone that features the Round's boss.

In the present, Tidal Tempest is an underwater region inside a ancient temple system. It rests on the base of many volcanoes and rocky structures. There are as well several yellow pipes that carry water from one area to another, with stone pillars adorning certain parts of the Round. The water elevation is as well normal in the present, giving the water a greenish tint when entered.

In the past, Tidal Tempest is a dark, underground cavern with little machinery. It features green pipes all over the caves. In addition, stone pillars take a different shape here and the water level is fairly low, giving the caverns a darkened tint when stepped into.

In the bad future, Tidal Tempest is an over-industrialized, non-functional and corroded water plant. Broken-down machines and stone pillars depicting Dr. Robotnik's face are featured here. Some brown pipes also carry water, which now looks unsafe, with a pinkish-reddish tint that makes it resemble Mega Mack. The water level is at its highest point in this timeline.

In the good future, Tidal Tempest is a fully operational, turquoise and magenta aquarium that harbors much plant life in hydroponic cases. Many fish Animals swim freely through the water, which features a pleasant light-turquoise tint when entered. The water here is carried through pink pipes. Just like the bad future, the water level is at its highest point in this timeline.

Having invaded Little Planet, which includes Tidal Tempest, Dr. Robotnik would install robot teleporters in the past and infest the region with Badniks. He would also put up some Metal Sonic holograms to terrorize the Animals that live there. Using these elements, Robotnik managed to conquer the future of the planet and rewrite history in his own image. As such, Tidal Tempest would be transformed into a broken down, non-functional and polluted water plant in the future.

After Sonic the Hedgehog arrives in the region, he manages to re-write Tidal Tempest's history and revert Robotnik's effects in the region. Eventually arriving at the end of Tidal Tempest, Sonic comes across Robotnik in his Egg Mobile. The two of them proceed to have a battle underwater, with the doctor Air Bubbles to defend himself. Using Robotnik's strategy to his advantage however, Sonic defeats Robotnik, who promptly retreats.

Switches that can be found in various places around Tidal Tempest and serve many purposes when pressed. This includes opening up for hidden rooms and passages, opening doors on both horizontal and vertical places (only to close up after the playable character passes through them). and underwater fans that create water currents that will push the playable character around. While carried around by the aforementioned water currents, the player can influence the direction their character is heading in by pressing left or right on

. There are also large pipes in Tidal Tempest that can will carry the playable character to different locations, much like the water currents.

Zone 2 features unique gimmicks that can only be seen in specific timelines. In the present, cyan statues depicting a face appear that can shoot harmless water blast streams that can push the playable character in the direction they are facing. In the past, a trio of green blocks may also appear. These blocks make form a 90 degree angle. When stepping on their edges, these blocks will rotate 90 degrees in the direction where the playable character had stepped on. In the future, iron balls may appear either as standard obstacles or rotating in specific patterns. At the very bottom of the Zone near the goal of the Zone, there may also be a Switch that, when activated, will disappear and release Air Bubbles (in the bad future) or Rings (in the good future) shortly afterwards. Near this section, there also appears a cubic machine with a giant Switch that, when stepped on, will activate the machine and send the playable character to a higher point.

Tidal Tempest Zone 1 takes place mostly underwater, though most of these sections can be skipped by running through the top part of the Zone. At the bottom of the Round, many kinds of gimmicks can be seen, such as Air Bubbles and Switches that activate propellers/devices that can take the player to different places.

Like in Zone 1, Tidal Tempest Zone 2 takes place mostly underwater. The very lowest parts also feature some sections where propellers/devices send the player automatically spinning through long corridors with iron balls in them, which require the player to grab onto poles in order to avoid these obstacles.

Tidal Tempest Zone 3 is shorter than the first two Zones and takes place in the future due to the battle against Dr. Robotnik. Before that, the player will be able to grab some Rings, an Extra Life, and a Shield.

In Zone 3, the player will battle Dr. Robotnik in the Egg Bubble. This battle has two phases: in the first, the player will have to hit Robotnik four times while chasing him in a maze-like section, while in the second, they will both be in a flat, underwater field. Robotnik will use Air Bubbles to protect himself while shooting projectiles often.

In the Sonic the Hedgehog comic series and its spin-offs published by Archie Comics, Tidal Tempest appeared as a Zone on Little Planet. Its history was mostly the same as its game counterpart. 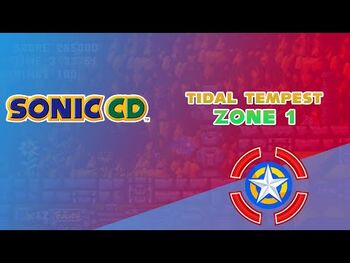 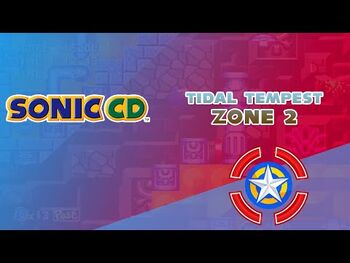 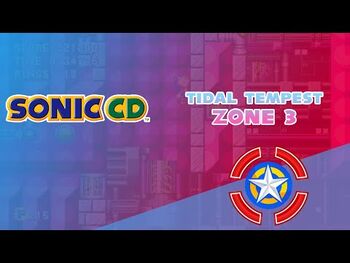