Ticktock[1] (ジュップン[2], Juppun?) is an enemy that appears in the Sonic the Hedgehog series. It is a mass-produced, clock-based Badnik model created by Dr. Robotnik.

The Ticktocks only appear in Amazing Arena. In gameplay, they drift back and forth within a small area, swinging their spiked pendulum. They makes no active attempt to attack the playable characters, and are only dangerous if the player bumps into them. Like many of the enemies in the game, Ticktocks are powered by synthesized Rings which they drop upon defeat.

The Ticktocks are capable of levitation. Also, they can use their pendulum bobs as spiked maces.

In the Sonic the Hedgehog comic series and its spin-offs published by IDW Publishing, the Ticktocks are a Badnik line created by Dr. Eggman in another dimension set in the recent past. In this media, they are a fusion of the Ticktock and the Alarm Egg from the NiGHTS into Dreams... franchise. 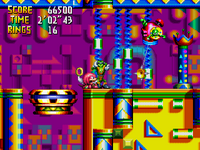 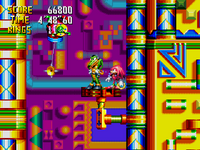