Tiara Boobowski, also known as Tiara B., is a character created for the cancelled video games Sonic X-treme and Sonic Mars. She is an anthropomorphic Manx cat created by Chris Senn, the lead designer for Sonic X-treme, who was also responsible for the concept of her father, Gazebo Boobowski. One of the four characters originally intended to be playable, Tiara was dropped when development difficulties forced the team to focus solely on Sonic the Hedgehog.[3] Later, she was worked into three of the game's potential story lines.[4][5][6]

Chris Senn intended for her to be a love interest for Sonic in order to add romantic tension to the story.[7] He had hoped that the story would show Sonic meeting his "match" in Tiara, but the stories the team developed had to focus on bringing together the levels and supporting a basic premise of good against evil.[2]

Tiara was developed to be a spunky female protagonist who could match Sonic the Hedgehog in attitude, and was meant to not be a typical "damsel in distress". Chris Senn later admitted that, should she have ever materialized completely, she would have fit the stereotype of "girl power".[2]

Senn originally planned for Tiara to be a bandicoot, a la Crash, but her species was later changed to a Manx cat. The name, "Tiara", was the input of executive producer and team leader Michael Kosaka, and was meant to invoke a "princess with class". Senn came up with her last name, "Boobowski".[2]

The latter stages of design exploration occured from 1995 to mid 1996. Early concept sketches included an armored suit, a red dress, and a design without clothes with a fur pattern similar to Sally Acorn. Chris Senn has stated that any similarities between Tiara and Sally were unintentional. The design that was settled upon included a matching crop top and skirt set that was red with yellow trim, brown shorts, red and white shoes, and rings around her wrists and ankles. Her hair was held up in a ponytail with a yellow ribbon.[2]

However, Kosaka envisioned the character as having more attitude. Senn changed the design accordingly, giving Tiara a bandeau top, tights and sneakers. The bow was also discarded in favor of a plainer hair tie. Senn felt this design conveyed her attitude, but he later admitted that her original design was his favorite.[2]

Tiara is an anthropomorphic Manx cat with orange fur and peach skin. Her eyes are blue, and her brown hair is worn in a ponytail. Like the typical Manx, she does not have a tail. She is depicted with a noticeable eyelid crease, a design element rarely seen on other Sonic characters. Her attire consists of a bandeau top, tights and sneakers. She also wears white gloves with bracelets for cuffs.

Originally, Tiara was created as one of four playable characters. Each character would have their own type of game mode, each with a different perspective.[3] Tiara's mode featured two-dimensional gameplay with the additional ability to travel forward and backward to other 2D planes. However, when Clockwork Knight 2 was released, the team realized that Tiara's gameplay was exactly like that game.[2] Tiara would be able to perform classic Sonic series moves such as the Spin Dash,[8] in addition to new "power moves" performed with a scepter.[2]

In the "Sonic Twist" storyline by Chris Senn, Sonic the Hedgehog must travel to a romantic location in Tiara's kingdom for a date with her. However, to reach the location, Sonic must journey through many obstacles and enemies. The longer it takes Sonic, the angrier Tiara will be when he finally reaches her, as revealed to the player through cameo footage of her throughout the game. Sonic, realizing that Tiara will be angry with him, decides to collect the seven Chaos Emeralds along the way and make them into a necklace for her. Sonic's troubles begin when Dr. Robotnik decides to destroy the landscapes in his path in an attempt to stop Sonic from taking the Emeralds and to trap him forever.[4]

This storyline featured Tiara as a princess, something that changed when later stories required a professor character. Tiara's father was changed from "King Cyberooski" to "Professor Gazebo Boobowski," and thus her role changed as well.[2]

In the "SonicBOOM" storyline by Chris Senn, Dr. Robotnik has been infected by the deadly Doom Virus. In order to obtain the ingredients needed for the cure, he decides to infect Sonic with the virus and let him obtain the cure for him. As bait, Robotnik kidnaps Tiara, chaining her to a wooden platform hung over a bed of spikes. Sonic finds her in time and immediately saves her. However, Tiara then reveals that the chains had been laced with the Doom Virus. Sonic's only hope is to see Tiara's father, the professor who lives in a castle on Misty Peak. Upon hearing of his daughter's rescue, Professor Gazebo Boobowski is glad to help Sonic on his adventure.[5]

In the "Sonic DOOM" storyline by Chris Senn and Richard Wheeler, Robotnik has cracked the Master Chaos Emerald in an attempt to tap its power. As a result, the Doom Virus is released into the air. After failing to extract a cure from Professor Gazebo Boobowski, Robotnik kidnaps the professor's daughter, Tiara. Knowing that Sonic cannot resist rescuing a creature in danger, Robotnik uses her as bait, setting the Master Emerald above a bound Tiara. Sonic spins around her like a whirlwind, freeing her. Tiara informs the hedgehog that by doing so, he had contracted the virus. Sonic's only hope is to see her father, Gazebo, the professor in the castle.[6] 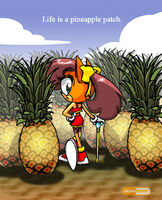 Illustration of 2nd to last design (January 2006 by Chris Senn).