The Thunder Spinner, from the Wii version of Sonic Colors

Think of these like a normal Spinner and you'll be in for a world of hurt when it discharges a jolt of electricity your way. Wait for their zap to end, then take them out!

The Thunder Spinner[3] (サンダースピナ[4], Sandā Supina?), also known as the Electro Spinner[1] (スパナ, Supana?), or the Spanner[2] (スパナ[5], Supana?) is an enemy that appears in the Sonic the Hedgehog series. It is a mass-produced, bat-based Badnik model created by Dr. Eggman, and a variant of the Spinner. These robots can both fly and discharge an electrical field to protect themselves.

As with other Spinners, they mostly resemble bats, while their design details vary between games. In Sonic Adventure and Sonic Adventure DX: Director's Cut, Electro Spinners are nearly identical to Bladed Spinners. They have a hemisphere-shaped purple head with pointy yellow ears and menacing black and cyan eyes with white sclera. Below their head they have a conical frustum-shaped gray body, and on the bottom of it they have two cylinder-shape attachments. On the bottom and the upper edge of their body they have a line of black and yellow hazard stripes. Between their head and body, Electro Spinners have a pair of giant hook-like blades spinning around them like a helicopter rotor.

In Sonic Unleashed, Thunder Spinners underwent a major redesign. In this game, their entire body is orb-shaped and they are primarily colored turquoise. They have yellow drill-like ears, empty yellow eyes and a row of yellow lights on the front, resembling a mouth. Also, around the middle of their body, they have a yellow ring with a transparent semicircle (reminiscent of wings) attached on a turquoise point on each side.

In Sonic Colors and Sonic Generations, the Thunder Spinners' design resembles a hybrid of those they had in Sonic Adventure and Sonic Unleashed. While their upper head and wings resemble those in Sonic Unleashed, their lower body look like they did in Sonic Adventure. Noticeable changed details, however, include their ears which look like they did in Sonic Adventure, their eyes having yellow irises and black pupils and sclera, their mouths being white, their mouths being colored white, their spinning wings being solid and are colored turquoise, white and yellow, and a lack of hazard stripes on their bodies.

In the Nintendo 3DS version of Sonic Lost World, the Thunder Spinner models retained the same appearance as their model design from Sonic Generations, only with the addition of a more "cartoon"-stylized design, along with cartoony eyes.

These enemies made their debut in Sonic Adventure and Sonic Adventure DX: Director's Cut, where they were officially known as Electro Spinners[1] (スパナ[6], Supana?, lit. "Spanner"). They appear in the following Action Stages for each character:

In the Xbox 360/PlayStation 3 version and Wii/PlayStation 2 version of Sonic Unleashed, the Electro Spinners are called Thunder Spinners (スパナ, Spana?), and serve once again as enemies. They also received a more modernized and less-menacing design for this title. Notably, Sonic Unleashed was also where the Thunder Spinners received a turquoise color scheme to distinguish them from Spinners. This color scheme would remain with them in subsequent titles.

In the console/PC version of Sonic Generations, Thunder Spinners from somewhere across spacetime appear as enemies in Speed Highway, Seaside Hill and Rooftop Run. In this game, they have their design from Sonic Colors. In gameplay, like in the previous games, the Thunder Spinners retain the same attack patterns they had in Sonic Adventure.

In the Nintendo 3DS version of Sonic Lost World, the Thunder Spinners appear as enemies once more. The player encounters them in Tropical Coast Zone 2, Frozen Factory Zone 1, 2 and 3, Silent Forest Zone 2 and 3, and Sky Road Zone 3. In gameplay, they retain their attack pattern from the previous games they appear in.

Thunder Spinners have the ability to fly in mid-air by rotating their wings. They also come equipped with the ability to discharge electricity around their bodies in the form of a shield, allowing them to both protect themselves and electrocute those making physical contact with them. 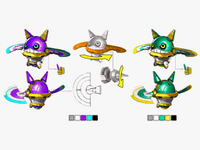 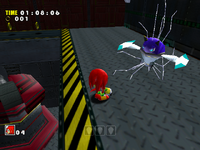