An attack that shoots an ally as an electrically charged projectile.

Thunder Shoot[1] (サンダーシュート[2], Sandāshūto?) is a Fly Formation maneuver used by Miles "Tails" Prower on Team Sonic, Rouge the Bat on Team Dark, Cream the Rabbit on Team Rose, and Charmy Bee on Team Chaotix in Sonic Heroes. When using this technique, the team's Fly type member launches their teammates like cannonballs towards enemies.

By collecting yellow Power Cores during gameplay, the player can increase the power, effect, and radius of the Thunder Shoot. The levels of power are as follows:

To perform Thunder Shoot in gameplay, the selected team must be in Fly Formation and have at least one other team member present or the move will fail. The player then has to press the Attack button (

) to launch the teammates at enemies. When launched away, the teammate will home on to any nearby target. When used on airborne enemies, the move will cause them to drop to the ground. For as long as the player has other team members present, the player can continue to use Thunder Shoot in succession.

Aside from attacking enemies, the player can also use Thunder Shoot to trigger Target Switches in the air, shoot airborne Cages down from the air, or fill the Team Blast Gauge (although it fills a very partial amount). 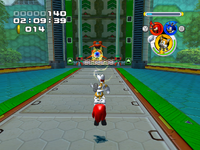