Thunder Deck is the final racetrack in Sonic & Sega All-Stars Racing. It is one of three courses in the game that are based off Final Fortress from Sonic Heroes.

This course is rather long, containing many flat stretches of road with very few obstacles. The stretches mean that weapons have limited success in finding their targets, so the player must focus on racing as quickly as possible through these areas. Around the course's halfway point, there is a flaming core and a platform that extends to the left and right around it. The player can drift around those platforms and probably come out with a helpful boost, but there is also a helpful shortcut. If the player heads straight toward the core with enough speed, he/she will be launched across the gap and through the flaming core unharmed.

In Team Sonic Racing, Thunder Deck returns as one of the tracks located in the Final Fortress, along with Turbine Loop and Dark Arsenal. The track has not been changed much, except for some graphic modifications.

For Final Fortress-located tracks, such as Thunder Deck, these are the following tracks selectable for the course: 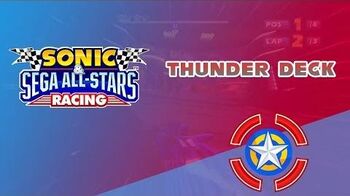