Thorn the Lop, from Sonic Universe #46.

Thorn the Lop is a character that appears in the Sonic the Hedgehog comic series and its spin-offs published by Archie Comics. She is a Mobian rabbit and a member of Mercian Freedom Fighters.

Thorn is a mobian, white rabbit with a green dress that has purple spike-like patterns on the bottom. She has ear ring piercings on her ears and a purple scarf on her neck. She has brown shoes, purple eyes, and gray ears.

After finding the Chaotix–Vector, Espio, and Charmy–Thorn and her teammates - Bow Sparrow, Alan Quail, Friar Buck, and Munch Rat - helped out by defeating Dark Egg Legion G.O.O.N.s and by telling them that their missing friends, Mighty and Ray, was at the Deerwood Forest looking for Mighty's sister. Bow helps them out by letting them stay over at Hideaway, but the Dark Egg Legion attacks their hideout. Thorn and the others defeat the goons and Bow tells Mighty and Ray to leave to Snottingham Castle to find their sister if she is there. And so, Vector and Bow make a plan to sneak inside the fortress to save Mercian villagers and possibly Mighty and Ray if they were captured. Thorn and the others are now inside the fortress looking for the lost comrades.[2]

Thorn, along with the Mercian Freedom Fighters and Chaotix, sneaked into the fortress and, thanks to Espio giving them a Warp Ring, teleported into the dungeon to save Mercian villagers. When Lord Mordred Hood and several of his minions found them, Thorn helped defeat Dark Legion minions in order for the villagers to escape via Warp Ring. But, Lord Hood then hypnotized the Mercian Freedom Fighters. Help came seconds later, as Vector punched the snake in the back and helped the Freedom Fighters and villagers escape. They then found themselves surrounded by G.O.O.N.s and Lord Hood with his minions. Espio came to help them by transported them to Deerwood Forest Hideaway by the Warp Ring. After claiming victory, the Chaotix left the Hideaway the next day.[3]

Thorn is a determined fighter, but is also polite, particularly when addressing her teammates. She is somewhat more reserved and serious than the rest of the group, and is usually the one to try to keep the others in line, though she readily admits defeat when her friends burst into song. As a Highlander, she speaks with a slight Scottish accent. 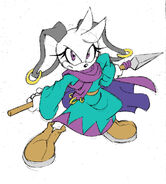