watch 03:03
The Loop (Games)
Do you like this video?
Main page Gallery

For the location in the Archie Comics, see The Pit (Archie).

Sonic and Knuckles in the Pit.

The Pit (ザ・ピット, Za Pitto?) is the fourth area of Sonic Boom: Rise of Lyric.[1] Surrounded by a jungle, the Pit is a polluted industrial dig site for Lyric the Last Ancient and his Destruction Troops. Roaming the underground in search for the Chaos Crystals are Lyric's Driller Worms.

While Lyric's forces were on a mad hunt for the Chaos Crystals, Team Sonic came to the Pit to find its Crystal. After going their separate ways and reuniting, the team found and took the Crystal from a Driller Worm.

The Pit is an extremely contradicting environment. The outer landscape is a tropical and life-rich jungle in a distant mountainous archipelago, where large palm trees and grass grow in abundance on top of rocky cliffs. Ancient buildings resembling watchtowers can also be seen on each island.

The central landscape of the Pit is a nightmarish dig site of dark violet dirt and rocks, and canyon-like passages with no flora (excluding dead tree stubs and roots). The area is also extremely polluted, having pools of green waste flowing through it. The underground holds as well large tunnels made from Driller Worms and an underground complex from the Ancients. In the center of the Pit lies its namesake; an immense and vast artificial hole near the size of a valley.

The Pit's main section is heavily industrialized and fortress-like, though much of it is not up to date and rusty. Scaffolds and supports made from different metals align the walls. There are also metal fences, mine carts, mine tracks and digging machinery everywhere. The Pit's center is the most industrialized area and resembles a processing plant with pipes, gears, tanks and smelting forges of enormous proportions, along with conveyor belts, heavy duty machinery and lava pits.

About a thousand years ago, the Ancients hid away their red Chaos Crystal in the Pit so that Lyric could not find it.

A millennium later, Lyric send his Driller Worms to the Pit to find the Chaos Crystal. Not long after, Team Sonic came for the Crystal as well, after crashing in the outskirts in the Riptide. To cover more ground, Tails and Amy continued up along the ridge while Sonic and Knuckles cut through the dig site. Along the way, Sonic and Knuckles had some quality time together and an encounter with the Driller Worms, before they met up with Amy and Tails again. Just then, a large fan suddenly blew the team down a route to the Chaos Crystal. However, a Driller Worm suddenly appeared and took the Crystal, forcing Team Sonic to defeat the robot and reclaim the Crystal.

A while later, Lyric and Dr. Eggman found the remains of the Driller Worm. While Eggman feared retaliation from Lyric, as the doctor had claimed he killed Team Sonic, the snake remained silent, much to Eggman's relief.

In the Pit, the player has to travel through the dig site and into the heart of the area. Like other areas in the game, the Pit includes speed level sections, where the player runs down a long path with speed-enhancing gimmicks while avoiding hazardous obstacles, and as well slower-paced areas for exploration and combat. It also features standard puzzles that the player must solve with the Enerbeam mechanic and Buttons.

Despite all characters being playable, the Pit only has gimmicks for Sonic and Knuckles' character actions. These gimmicks include Spin Ramps, a Spin Ball and Air Targets for Sonic, and Climbable Walls and Ceilings and diggable ground for Knuckles. Hazardous obstacles in the Pit include burning furnace floors, small surface sockets that spew fire in different intervals, glowing shredders that in some instances move, and bottomless waste floods and lava pits. There are also ground-bound mines that detonate either when attacked or with delay when approached. Additionally, there are moving conveyor belts that make it more difficult for the player to navigate, and can pull them into fire.

In the Pit, the player's objective is to find the red Chaos Crystal. At the beginning, the player must first complete a speed level section with all four characters. After that, the player has to go through a forest until they reach the Pit's dig site. From here, the player can only use Sonic and Knuckles.

From within a secret chamber, the player must follow the Driller Worm's tunnel to an obstacle-filled path through the complex. Once through, the player will arrive at a gate. Open the gate and press the Button behind it to unlock a small speed level section. Beyond this section, the player must defeat waves of enemies to unlock a Bounce Pad to the upper levels, where the player must solve another puzzle to open a small speed level section. After this section, the player has to pass another industrial section with hazards and puzzles to reach a platform above a lava pool with a gate. Here, some enemies must be defeated. The player then has to open the gate and destroy some red lights behind it to open a path to Tails and Amy. From there, the player takes control off all four characters again and has to complete another speed level section to reach the Driller Worm boss battle.

The boss of the Pit is the Driller Worm, a giant Crystal-seeking robot. It can be fought directly after reaching the end of the Pit. For this boss battle, the player controls all of Team Sonic.

For the majority of the battle, the Driller Worm will stay out of the player range and either shoot dirt at the playable characters or squash them with its body. To defeat the Driller Worm, throw Destruction Troops into its mouth until gets stunned and pull it in with the Enerbeam for a beatdown. Repeat this three times to clear this boss. 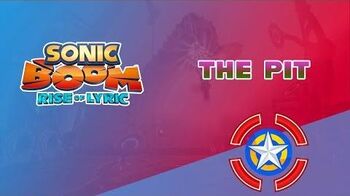