The Legend of Zelda Zone

The Legend of Zelda Zone

Promotional artwork of The Legend of Zelda Zone.

The Legend of Zelda Zone is a downloadable content Zone exclusive to the Wii U version of Sonic Lost World. The Zone is based on the The Legend of Zelda series. Link, the protagonist of the franchise, is also seen throughout the Zone on occasion.

In this Zone, Sonic the Hedgehog is dressed as Link and Rings are replaced with Rupees, the main currency of the Zelda series, which turn into saved animals after being collected. The first part of the Zone takes place in Hyrule Field with Hyrule Castle in the background; the enemies found in this part are Stalchildren and Deku Scrubs from The Legend of Zelda: Ocarina of Time. The second part of the Zone takes place in a dungeon, in the same style that The Legend of Zelda series is famous for. In addition to Stalchildren, Sonic must also avoid Gorons, who will rise from the ground and attempt to roll over him. When hit, Sonic loses Hearts and he must find new ones in Treasure Chests that add to his total. At the end of the Zone, Sonic finds the Triforce.

Stalchildren: Undead skeleton children that are part of the Stal Family of Monsters. In this game, the serve as a reskin of the basic Egg Pawns. To defeat them, a fully charged Focused Homing Attack or Flying Kick must be used to knock their heads off. Stalchildren can be found both inside the dungeon and outside in the field portion of the stage.

Deku Scrubs: Small living plant creatures that live underground in patches of grass. To defeat them, the Deku Nuts they fire must be knocked back into them, either with a simple Homing Attack or a Flying Kick. The Deku Scrubs appear on the two small islands on the lake in the outside portion of the Zone.

Keese: Found only in the dungeon section, Keese are bat-like monsters. In gameplay, they serve as a reskin of the Batbrain foes found in normal stages. 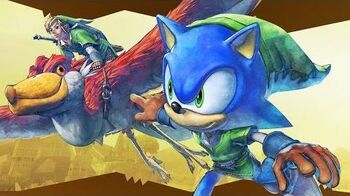 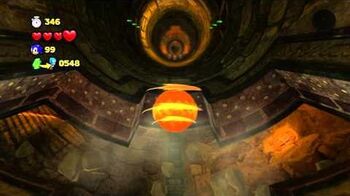