Shadow in The Last Way, from Shadow the Hedgehog .

Inside the Black Comet

The Last Way is the final Stage in Shadow the Hedgehog. It can only be reached by completing both the Hero and Dark missions of all five of the sixth stages, thereby fighting all bosses and seeing all ten endings.

Shadow has collected all seven Chaos Emeralds and is aboard the Black Comet. Black Doom approaches and demands him to hand over the Chaos Emeralds. Then Sonic, along with Knuckles, Amy, Tails, Rouge, and Dr. Eggman (in person), arrive to stop Black Doom from gaining the Chaos Emeralds. Black Doom explains that the Black Arms are not out to destroy the planet, but to "harvest" the humans as an energy source. Black Doom then takes the Emeralds and performs Chaos Control, warping the Black Comet down from space onto the Earth's surface. Black Doom explains that they needed the Chaos Emeralds because the Black Comet's velocity is not strong enough to penetrate a planet's atmosphere. He then tells a little story about the fateful deal he made with the late Gerald Robotnik fifty years prior. As Shadow collapses in disbelief, the others prepare to face Black Doom, but he releases a special type of nerve gas into the area, completely paralyzing the entire group. Laughing maniacally, he sends his dark alien offspring to feed on the blood of the helpless heroes (and Eggman), but Shadow somehow manages to break free of the effects of the gas (most likely because he was created from Black Arms DNA). Declaring that no one can tell him what to do now, Shadow tells Black Doom he will destroy him. After expressing his outrage at this, Black Doom retreats deeper into the black comet with Shadow in pursuit. All the frozen heroes (and Eggman) can do as pray as Sonic says to Shadow, "You're our only hope now!"

After making his way through half of the area, finally catching up with Black Doom, Black Doom reveals that Shadow is directly grown from his blood; a revelation which flaws the Ultimate Lifeform when he reaches the alien's inner sanctum once again. Shadow then asks, "Just... Who are you?" Black Doom then tells him that he was a part of him and that he was created from his blood. Black Doom then elaborates telling him that Professor Gerald needed Black Arms DNA in order to stabilize Shadow, and in return, he would deliver him the Emeralds. All hope seems lost until Team Chaotix is then seen back aboard the ARK trying to save some data they've lost by hacking into the computer room. They then accidentally feed a recording of Gerald aboard the Black Comet where Shadow and Black Doom are. Gerald then explains that he made a horrible mistake making contact with the Comet. He then told Shadow that the only weapon that could stop them was the Eclipse Cannon, back aboard the ARK. Freshly galvanized by this new transmission from his maker and vowing to put his past behind him, Shadow uses the Chaos Emeralds to become Super Shadow, and flies off to confront Black Doom in his final form, Devil Doom outside the grounded Comet.

After defeating Devil Doom, Shadow then uses Chaos Control to warp the Black Comet out to space where it was shot by the Eclipse Cannon. Sonic and co. are out on the streets of Westopolis cheering him on as they watch the Eclipse Cannon shoot the Comet. Shadow is then seen aboard the ARK with a picture of Gerald and Maria as he vows to leave the past behind him and casually tosses the photo to the side.

The following weapons can be found in The Last Way:

The Secret Door, which is right of the first Key obtained, houses a Warp Hole that takes the player to the fourth Save Point.

Use Chaos Control as often as possible; the Stage is limited to ten minutes. Also, between the third and fourth Save Points, Shadow will be trapped in a room that requires Chaos Control to escape from.

The Last Way's Expert Mode requires the player to defeat as many Black Arms as possible. Through the use of Chaos Control, this Stage can be completed quite quickly.

Interacting with the Hint Ring at the beginning of the Stage will display a good luck message from every character seen in the game. 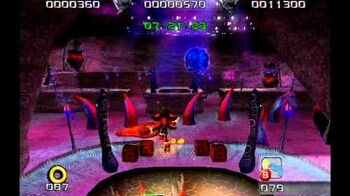