The History of Sonic the Hedgehog

The History of Sonic the Hedgehog

Many of you have to ask ourselves: a book licensed creates so many problems … Are we not finally discouraged? Oh no! We went back as ever, ready to engage in new battles. And at the next game, we will much better armed.

The History of Sonic the Hedgehog is a retrospective book that was to be released on January 3, 2013 by Pix'n Love; however, it was delayed to 6 September 2013. This book covers every main game up to Sonic Generations in detail.

The History of Sonic the Hedgehog covers the content on every 2D and 3D game in the Sonic the Hedgehog series along with every spin-off, and crossover game, including Sega's history. This book also features promotional art, character profiles, game packages, detailed history and even some rare concept art. It also includes exclusive interviews with Yuji Naka, Naoto Ōshima, and Takashi Iizuka.

Pix'n Love announced that the book became available starting 25 April 2012. However, various setbacks delayed the official publication of the book. There were also some licensing issues with some of the book’s contents, according to a translator working on the English version. 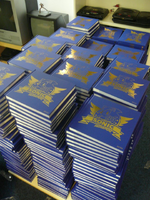 Sonic the Hedgehog in other media
Community content is available under CC-BY-SA unless otherwise noted.
Advertisement