"The Dam Scam" is the eighteenth episode of the anime series, Sonic X. It first aired on 3 August 2003 and 31 January 2004 in Japan and the United States respectively.

The episode starts off with brief sceneries of some animals in a savannah. Sonic, Tails and Chris flying over the large savannah in Africa. As Tails and Sonic look at the wildlife down below, Chris frantically points at the radar in front of Tails. Above them is Dr. Eggman's Egg Fort. Eggman quickly tells Decoe and Bocoe to fire at the X-Tornado. They do but the X-Tornado avoids the missiles. Sonic uses a Ring to gain power and uses a Spin Dash, slicing right through the ship which greatly damages it. Eggman's airship starts to crash and Tails brings the X-Tornado close for Sonic to get back on, but an explosion pushes the plane away. Tails tries to get the plane through the debris, but a large piece of the Egg Fort shatters one of its wings.

Tails and Chris continue to spiral down into the thick jungle. The two of them land safely and Tails begins to repair the X-Tornado. After a while, Tails finishes, but Chris explains that the wing is still broken, so they won't be able to fly. Tails says that he is right but the plane can walk. Tails transforms the X-Tornado so it can walk, but as soon as it does, one of the legs falls off, collapsing the plane onto its side. Tails resumes fixing the X-Tornado and when Chris asks if there was something he could do to help, Tails says he can handle it himself. Chris notes that he doesn't have phone reception where they're at. He lays down under a tree and Tails tells him he can take a nap and he'll wake him up when he's done. Chris says that the area was different from Station Square and when Tails asks how that is, Chris replies that time seemed to move slower than normal.

Tails says that he doesn't think it feels any different than from in the city and says that it reminds him of home. Chris asks if Tails misses his home to which the latter replies that he really missed it at first, but now he likes Station Square and desires to start an engineering company there someday and build machines. Tails asks what Chris wants to do when he's older, to which Chris replies by saying he wants to study zoology, despite that his grandfather and father wanting him to build machines like they do. Now that he met Sonic and the others, he is more interested in animals than machines. Just when Chris tries to say that they're not just animals, Tails exclaims that the X-Tornado is fixed and the two go off to find Sonic.

Meanwhile, the Egg Fort has crashed into a swamp. Eggman opens the side hatch and soon gets surrounded by crocodiles. Decoe and Bocoe then launch E-65, a large gorilla-like mech, to search for Sonic. They tell Eggman that they will inform him when they find Sonic and Eggman warns them not to fail him (with a few unconscious crocodiles in front of him). E-65 then takes off into the jungle. Meanwhile, Sonic is running across the plains, looking for Tails and Chris, when he comes across a cheetah. The two start to race and Sonic picks up the cheetah as a show of skill and runs faster.

Tails and Chris come upon what looks like a construction site. Two working men (named Sergei and Boris) are talking and Tails and Chris go up to them. The two men ask how they got in, saying that this is a restricted area. The two heroes ask what they are building and the men reply that they are building a dam. Chris is astonished and explains to Tails what a dam is. Tails looks around and says that he doesn't see any water around the dam. Sergei says that they are being too nosey and Tails spies the animals watching the construction sight. Tails asks the men if they thought about what will happen to the wildlife when they are finished with the dam. Sergei replies he doesn't care what would happen to them and calls over a man named Ivan. Ivan turns out to be a large construction worker and the man tells Tails and Chris to get lost, as the two men leave. Tails goes and yells at the animals, saying that they deserve to lose their home. Chris asks if he's okay and Tails apologizes for his tone, explaining that back on his world, the other animals would tease him and destroy the machines that he made.

The flashback goes on to show Sonic running up while Tails watches him behind some bushes. Sonic then runs off while Tails eagerly follows him. He comes across a beach and sees a red biplane parked on the sand. Tails examines the plane and starts to tinker with it, making it faster and even repainting it blue. Sonic then appears and Tails says that when he sees a machine he can't help himself and that he fixed the engine so it can go faster. Sonic says that he also like what he did with the color and Tails shows him what else he did with the plane. Sonic asks if Tails had followed him around all morning to check out his plane, or if there was something else he wanted. Tails tells Sonic that he likes to fix, make and repair machines, but the other animals make fun of him. He says that he thought Sonic looked cool, so he followed him and fixed up his plane so they could be friends. Sonic asks Tails his name, and Tails introduces himself, saying that his friends called him Tails. Sonic then introduces himself, and thanks him, saying that he needs a mechanic and a friend. The two of them then become friends. The flashback ends when Tails tells Chris that everybody picked on him.

Tails orders the men to close down the construction site for the animals' sake or he'll shut it down himself. Just then, a bulldozer starts moving near him, threatening to crush him underneath it. He runs out of the way and Chris says they might need some help to stop the dam from being built. To show that they want to help, the animals behind them step forward, all with a determined look on their face. Tails and Chris head back to Station Square and tell them about the dam and that they need to work together to help the nature preserve. The citizens immediately agree and before long, a large protest crowd has begun in front of the dam construction site. Sergei and Boris try to calm the mob down by explaining the dam's purpose, but this makes the citizens even angrier. They also see Tails and Chris and the men realize it was the duo who had brought the crowd there. The men tell the crowd to leave and that it is a restricted area, but the citizens would not budge. Tails and Chris embrace in a hug to celebrate.

The two men drive off into the middle of the jungle and Sergei starts to unload gasoline cans from the back of the jeep. Boris asks how they will build the dam when there isn't any water and then Sergei explains that they will burn down the forest using the gasoline cans and once the forest is all gone, rainwater will have fallen in the area with seemingly with nowhere to go, so the people will be begging them to finish the dam. Just then, the two hear a noise and E-65 comes out from the forest. After looking at the two men, Decoe and Bocoe say they aren't Sonic but they then see Sonic in the distance.

They order the gorilla mech to pursue Sonic and, after pounding on its chest, it charges at him. Sonic runs right underneath E-65, causing the robot to trip and fall face-first onto the ground. E-65 gets up and charges at Sonic again, but he disappears into the forest. When E-65 passes a nearby tree, it suddenly becomes invisible. Boris tells Sergei to forget the plan, but Sergei doesn't give up, and the two of them run into the forest, each of them holding gasoline cans. Sonic eventually stops running to look behind him. He assumes he has lost the robot, until E-65 drops down from a tree and delivers a punch to Sonic, sending him flying. Using it's invisibility, it sneaks behind Sonic, turns visible and kicks him.

Meanwhile, Sergei and Boris are about to pour the gasoline when Dr. Eggman approaches them in his Egg Mobile. Eggman asks if they have seen Sonic and Sergei calls him a weirdo. The doctor doesn't appreciate the insult and shoots a green laser from his Egg Mobile, which cuts down the tops of some trees close to the two men, making them run away.

Back with Sonic, he looks for E-65, wondering how can he fight something he can't even see. E-65 suddenly drops down from the trees, invisible once again and then becoming visible and slams both of his fists down on Sonic. He then turns invisible as Sonic gets up. Sonic hears laughing and it turns out to be Eggman. The doctor claims that Sonic has met his match when E-65 punches Sonic from out of nowhere. Sonic stumbles back and E-65 pops out from nowhere and punches Sonic again. He then comes back once more for another punch delivered to Sonic. After all the beatings, Sonic closes his eyes and uses his sense of hearing to find the robot. He darts off into one direction, straight into E-65. E-65 falls onto his back and Sonic runs off, soon catching up with Sergei and Boris in the jeep. Eggman and E-65 soon pass them, too.

At the dam, Tails says that they are going to go home and that they'll go look for Sonic. Sonic, at that moment, comes running into view and runs over to his two friends. Tails and Chris tell Sonic what they did and then Eggman and his robot come rushing towards them. Sonic then runs right into the construction site with E-65 and Eggman hot on his heels. E-65 attempts to camouflage, but it doesn't work all the way.

It has stepped in front of a construction machine and some of him is still visible. Sonic attacks E-65, forcing him to turn completely visible. Eggman, wanting to defeat Sonic, starts firing missiles and laser at all the machines in the site, destroying them. Sergei and Boris arrive on the scene and witness Eggman destroying the site. Sonic starts attacking E-65, not giving it a chance to protect itself. The gorilla robot falls on its back and both Decoe and Bocoe evacuate. Tails throws Sonic a Ring, which he uses to power himself up and bursts through E-65, ultimately destroying it. Sonic and Eggman then face off, but it doesn't last for more than a few seconds, ending in the Egg Mobile being trashed and Eggman, Decoe and Bocoe running off. Bokkun flies overhead and lands in front of Sonic and pulls out a mini television. He turns it on and Eggman appears on the screen. Eggman says that he is still in command, and to prove it, he orders Bokkun to perform a tap dance, which Bokkun does until he flies off crying in embarrassment.

Later that day, the police arrive, arrest Sergei and Boris and close the construction site. As they watch the police take the two men away, the heroes claimed that Eggman (sort of) helped them save the animals, because if he hadn't made them crash, they would have never been able to save the animals. 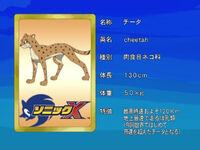 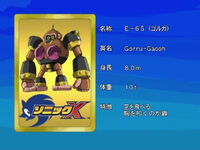 E-65 Gorru-Gaooh
Add a photo to this gallery