"The Cosmo Conspiracy" is the the seventy-third episode of the anime series, Sonic X. It first aired on 13 April 2005 and 1 April 2006 in France and the United States respectively.

The episode begins with Sonic and his friends all getting ready for a rest. Tails tells Chris to go to bed whilst he tries to fix the security mainframe. Meanwhile, Shadow is seen running down a corridor towards Cosmo's room. The security system comes on just in time to reveal Shadow's presence. Chris arrives on the scene to have Shadow fire a Chaos Spear at him. At the last moment, Sonic rescues Chris and takes the blow. Before Shadow gets a chance to attack Cosmo, Sonic gets back up and gets into a scuffle with him. Sonic tells Tails to run away with Cosmo. As they get out of there, Sonic gets knocked to the ground by Shadow and passes out.

Amy and Cream take the injured Sonic and Chris to the hospital room, so they could be recovered faster. Tails realizes that Shadow has the technology to hack the security camera system, so he tries to shut it down. Shadow still hacks into it, but by the time he sets off, Tails is hidden with Cosmo inside the engine room. Just then, Knuckles breaks through everything he can find and confronts Shadow. Knuckles manages to knock Shadow into the wall, but gets distracted by a Chaos Spear and the appearance of Rouge. She tells Knuckles that Cosmo has sensors planted in her by the Metarex.

Meanwhile, Shadow locates Tails and Cosmo inside the X-Tornado and a battle ensues. Tails and Cosmo attempt to escape in the X Tornado. but Shadow stops it from taking off by severely damaging it. However, Tails and Cosmo escape again into the air duct. Shadow follows them, but Tails reaches the top first and hits the shut down button, temporarily trapping Shadow in there with the lasers. Before Tails can move a couple of feet though, Shadow spin dashes through the ceiling and prepares for an attack. Knuckles arrives and tries to stop Shadow, claiming he always wanted to shadow box. Knuckles gets beaten down by Shadow, but managed to stall him long enough for Tails and Cosmo to escape, and left with Rouge.

After running for a while longer, Tails and Cosmo are cornered in a dead end and Shadow insists that Tails gives him Cosmo, but he refuses and pulls a lever behind him that traps Shadow inside the Sonic Power Cannon. The hedgehog is shoot off into space, but reappears via Chaos Control of which the emerald disintegrates, revealing it to be a fake. Shadow claims he does not want to hurt Tails, then walks toward a terrified Cosmo, saying "All right, let's get this over with." As he is about to kill Cosmo, Tails tried to stop Shadow by grabbing his leg but is severely wounded. Then just as Shadow was about to use Chaos Spear on Cosmo and Tails, the Metarex appears and reveals to everyone that Cosmo is a spy, she has a codename White Seed and they monitor what she hears and sees through some kind of device implanted in her brain. Cosmo's amulet shines and she screams. A white light surrounds The Blue Typhoon, making it disappear, and the episode ends on a cliff hanger. 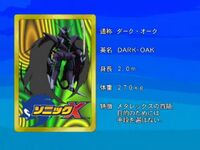 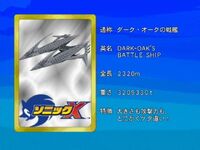