That's What Friends Are For

"That's What Friends Are For"

"That's What Friends Are For" is the fourteenth episode of the anime series, Sonic X. It first aired on 6 July 2003 and 6 December 2003 in Japan and the United States, respectively.

Following Eggman's defeat, the episode starts at the White House with Jerome Wise happily telling the President that the news of Eggman's defeat is sure to get him re-elected, but the President sadly retorts that Sonic is the one people see as the hero responsible for defeating Eggman. Wise notices Sonic's picture on the front page of many newspapers and then turns on a TV and finds that Sonic is on every channel. Wise panics about this and says that if they do not do something, the people will elect Sonic President. Wise suddenly comes up with an idea to host a victory celebration party at the White House and invite Sonic and the media so that the public will believe Sonic and the President are friends to increase the President's popularity so that he gets re-elected. Wise proceeds to get the preparations ready.

At the Thorndyke Mansion, Chris receives a letter addressed to Sonic from the President that he and his friends are invited to the celebration party in the White House, resulting in Sonic's friends being excited. Sonic however declines the invitation because during the party's schedule, he promises to take his new friend and another one of Chris' classmates, Helen, that they would visit an island where it is said to have a beautiful species of flowers, according to her father, Doug. The scene then flashbacks to Sonic's first meeting with Helen by the river leading to that island, where he saw Helen's wheelchair stuck in the mud. Sonic proceeded to rescue her. After greeting each other, Helen told Sonic that she wanted to visit the island. She mentions that her father at one point wanted to take the family to visit the island but he has been too busy working for long hours and has yet to fulfill that promise to this very day. Disheartened, Helen is desperate to go to the island so Sonic agrees to take her. Sonic needs to get his preparations for his trip and runs off.

The party begins with the guests and media at the White House, expecting Sonic's visit. A limousine appears outside and when the passengers Tails, Amy, Cream, Chris and Chuck stepped out, Wise is surprised that Sonic did not come to the party. Frustrated on not seeing Sonic, the photographers and reporters who are present turn to leave but Wise prevents them for leaving and asks them to wait in the buffet area, reassuring that Sonic will come. Meanwhile, he orders three government agents to retrieve Sonic. The three government agents visited the Thorndyke Mansion in order to retrieve Sonic but Ella called Mr. Tanaka who takes them out. After hearing about this, Wise resorted to using the military to capture Sonic by contacting the military secretary. His military division spotted Sonic running back to the Thorndyke Mansion to retrieve a boat. They tried to attack him but Sonic escapes from them. Back at the White House, the photographers and reporters complain about Sonic's absence again, but Wise kept them company by serving food and drinks.

Sonic and Helen finally started sailing towards the island, but their boat is attacked by the army which forces Sonic to take drastic actions to escape with Helen in his safety onto the island. Despite all of the risks, Helen takes it as a thrill ride of an adventure. Time passed by and at the buffet of the White House, Chris wonders what Sonic is doing. At the island, Helen tells Sonic how much she greatly appreciates the effort of her parents to look after her health but ponders that she could spend more time and have fun with them. Without much time to reflect on this, Sonic discovers that the army has dispatched a squadron of soldiers pursuing them, leaving Sonic and Helen on the run again. They manage to outrun the soldiers to safety and then arrive at the meadow of flowers which Helen's father mentioned about. This is an adorning sight to Sonic and Helen as they see the meadow seemingly covering a large area of land. Sonic proceeds to pick one flower for her but she stopped Sonic from doing so to which he understands to leave the flowers as they are. The soldiers are still persistent enough to capture Sonic so he takes off with Helen again until they seem to be cornered against the edge of the cliff leading to the lake by the authority soldiers. An authority helicopter flies by as well.

Despite being vastly outnumbered, Sonic managed to trick the authority soldiers and the helicopter into firing their hooked weapons together so that they formed a very tight knot, allowing Sonic to use the rope as a path to escort Helen into the helicopter. The pilot of the helicopter tried to grab Sonic but misses and falls out of the helicopter. Sonic quickly grasped the ability to pilot the helicopter and fly away. As it is late, he decides to bring Helen home. Helen pleads for Sonic to visit the White House because the President is waiting for him there and she did not want to be the cause for not being able to meet with him. Sonic and Helen finally arrive at the party and he meets the President. Excitedly, Wise asks the cameramen and reporters to come but they are too tired from the long wait and fell asleep, causing Wise to go haywire while everyone else laughed. In the end, Helen tells the story of her exciting adventure to her parents. As Helen's parents excused themselves to have a private discussion with each other, Helen's mother is touched by her daughter's excitement in which they had not seen for some time while Helen's father notes that he has been working too long and hopefully wishes to take the family on a trip to the island Helen visited soon. The episode ends with Sonic resting on a tree not too far from Helen's house. 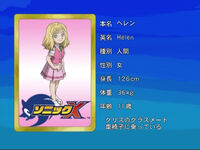 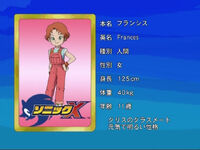