"Terror on the Typhoon"

"Terror on the Typhoon" is the seventieth episode of the anime series, Sonic X. It first aired on 10 April 2005 and 4 March 2006 in France and the United States respectively.

The episode begins with the Metarex fighting the Blue Typhoon who tries to rescue a small ship caught in the crossfire. They follow it to a perilous plasma cloud, but when they try to pull it out of danger, its pilot turns out to be Decoe. He has led the Blue Typhoon right into the path of a Metarex fleet led by Dr. Eggman himself.

Though Eggman is cooperating with the three remaining Metarex bosses for the moment, he finds their strategies to be incredibly ruthless. The Metarex are willing to destroy many of their own ships just to avoid wasting time with a slower offense. The Blue Typhoon counters with the Sonic Power Cannon, but Eggman raises a shield that both stops Sonic's attack and isolates the Blue Typhoon from the Metarex fleet. Tails is quite shaken that his weapon failed to work, and the Blue Typhoon takes heavy damage, leaving Sonic and Knuckles badly injured, and the Master Emerald at low power. The Metarex prepare to attack again when the shield comes down in five minutes, and Eggman slips away to the Crimson Egg.

With Sonic and Knuckles both out cold, Tails assumes command reluctantly until Cosmo boosts his confidence. Tails devises a plan where he pilots the Blue Typhoon towards a black hole in the plasma cloud, where he plans to use Ring Road to turn the plasma cloud against the Metarex. Through careful use of their shields, Sonic and Knuckles recover long enough to deploy the Sonic Power Cannon, reversing the black hole and allowing the Blue Typhoon to escape. Eggman also escapes by hiding behind the Metarex mother ship. Though Tails' confidence as captain was shaken during the experience, Sonic and Knuckles reassure him that he did a great job. 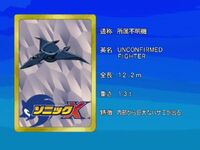 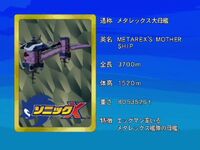 Metarex's Mother Ship
Add a photo to this gallery