A water city in the midst of a rough storm.

The placid waters of the aquatic city now rage within the black hole.

Tempest Waterway is the fifth course in the Babylon story in Sonic Riders: Zero Gravity. It is a place filled with water canals, similar to Aquatic Capital and lies near Monopole. It has rough waters thanks to the constant rainfall.

In the Babylon story, when Storm gets two of the Arks from Amy and the seemingly destroyed SCR-HD, Storm tries to return to Jet to report the great news.

The stage is similar to Aquatic Capital only harder and possibly in reverse, as the giant fountain from Aquatic Capital appears near the start of the course. The waters are much more rough due to the windy rainstorm making it harder for the player, and there are many obstacles along the way such as parked gondolas and broken bridges. Near the end of the course, there is a building which looks like an abandoned water factory, where the player passes through a water slide. There are a couple shortcuts that can be taken when on-foot with the attack item that lead to a quick gondola ride, in which the player controls the direction of said gondola to collect rings, similar to Aquatic Capital's shortcut. 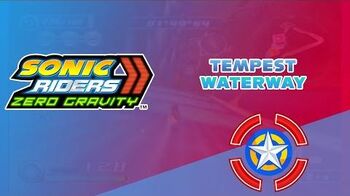