"Techno-Teacher" is the sixth episode of the anime series, Sonic X. It first aired on 11 May 2003 and 11 October 2003 in Japan and the United States respectively.

Sonic is on the roof of the Thorndyke Mansion, staring out into the open sky before he decides to jump off and have a nice run. Returning to the front door a mere second later, he is greeted by Amy, who asks where he went. Sonic simply replies "he's just out" before coming in. Amy considers Sonic mysterious. Chris is then seen eating breakfast served by Ella. Mr. Tanaka has just hung up the phone in the other room and entered the dining room to inform his Chris that his parents, Lindsey and Nelson Thorndyke, will be arriving home that night. Chris is at first excited, but then remembers Sonic and the others. He immediately decides that he is finished with breakfast and runs off to warn the others, leaving Tanaka and Ella confused.

A presumable while later, Sonic, Tails, Amy and Chuck are eating, while Chris, dressed and ready for school, explains that he doesn't believe it is a good idea for his parents to see Sonic and his friends. Amy and Tails ensure him that it will be fine. Sonic, however, merely finishes his food, gets up and walks off without saying anything. This leaves Chris confused and wondering if Sonic is mad. Amy responds that he's not and Chuck reminds him that he'd better hurry to school before he's late. Chris then freaks out and ends up falling down the stairs in a rush. Tails asks Chuck if Chris' dad is his son, to which he obviously says yes. Amy asks what he does and Chuck replies by saying he's the head of a very important company. Amy asks about Lindsey and he answers that she is a movie star. Under the realization that Chris doesn't get to spend much time with his parents, they all start to feel sad for him. Meanwhile at Dr. Eggman's Fortress, Eggman is swinging around in his chair thinking of another method for world domination as the ocean waves continue to crash against the shore of the island. He realises that in order to take over the planet, he needs respect. To gain that respect, he decides to go through with the children first. With that, Decoe hands the doctor his deck of cards and he puts them in the Selection Machine. The machine then lands on Intelligente. Intelligente flies out of the base and lands in Station Square, ready to carry out his mission.

In the classroom, Mister Stewart is asleep, leaving the kids with practically nothing to do except trying to solve difficult equations. Suddenly, Intelligente bursts inside the classroom, completely startling everyone and managing to wake Mister Stewart from his nap. Stewart asks what he is doing here. Intelligente strides up to him, claiming that he is the new teacher from this day onward. Stewart doesn't seem to understand at first, but understands it when he is tossed out of the classroom by the robot. Stewart gets angry and storms off to the principal. He goes to the principal's office, bursts in (which surprises the principal so much, he somehow spills coffee on top of his head) and leads him to the classroom. However, they hear laughter from the inside. The two look in to see Intelligente teaching the kids their lessons with a smile. They all like the new teacher and are obviously having fun. The principal praises the robot's teaching skills and advises Stewart to take note of this before leaving. Stewart only gets angrier and decides to report this to his headquarters. He sneaks into the bathroom and takes out his communication device to contact with the government agency to send in the army (a full platoon of ships, tanks, and fighter jets) to remove a single robot. Unsurprisingly, the man he is communicating with laughs at him; so hard, in fact, that it breaks the communication.

Stewart attempts to get the robot taken care of once more by notifying a police officer. He makes his way there slowly while eating a burger, which greatly annoys Stewart. When they reach the classroom, they find it empty. Stewart claims that the robot has kidnapped the kids. Intelligente is outside with the kids for P.E class they were going to play baseball. The kids cheer with excitement and begin. Stewart leads the officer outside to show him the robot. The officer, still munching on a hamburger and not having the slightest interest, tells Stewart that the children doesn't appear to be in danger but are rather having fun. Stewart tells him to quit eating the burger and takes it from him, which causes the officer to call officer assault charges and chases Stewart with a truncheon. Meanwhile, Dr. Eggman wonders on Intelligente's progress on the mission. He presses a button to see the children and Intelligente all playing baseball happily with each other. When the kids express their affection for Intelligente, Eggman yells that no one has the right to be too happy about this. Later, a helicopter lands on Chris' lawn, in which Lindsey and Nelson Thorndyke finally arrive and greet Ella, Mr. Tanaka and Chuck. Tails and Amy look out the window and admire them. Amy tells Sonic to watch, but he's uninterested and continues to rest on the roof. It appears something is clearly bothering him.

As the kids continue to play baseball, Bokkun arrives with a message for Intelligente from Dr. Eggman. The message tells him that he's angry that Intelligente is teaching the kids to respect himself instead of Dr. Eggman. Intelligente responds by saying that if he found his task more rewarding if he can get the kids to respect himself. Bokkun gets angry and says that he will be destroyed if he goes through with something like that. This argument gathers the kids around Intelligente, making them all wonder what's going on. Intelligente makes his everlasting remark that he refuses to abandon his students no matter what Eggman does to him. The children all become happy and express even more affection for Intelligente, who marvels at being 'loved' in return. Bokkun suddenly feels jealous, claiming that he wants to be liked and not bullied as well who then breaks down in sadness. While Eggman is watching this, he is getting even more angry.

Intelligente eventually claims that class is officially over. Chris happily tells Frances that he can't wait to get home and see his parents. However, he immediately spots Eggman's Egg Mobile flying overhead and landing in the field. Eggman jumps out of the cockpit with a tool-belt in his hand and calls Intelligente in an angry tone. Intelligente freaks out in fear, as Eggman tells him that he is going to take him apart for his treason. Intelligente goes to Chris for help. Chris gets confused and points out that Intelligente himself said that he'd protect the kids from Eggman, no matter what he does. He asks if he really said that. Slightly annoyed, Danny and Frances point out that he did. Realizing that there was no turning back, he decides that he has no choice. Eggman begins to laugh and tells the kids that Intelligente isn't to be believed and then orders Intelligente to keep the students in detention to force them to respect the doctor. Eggman then tells Intelligente that if he doesn't wish to be taken apart, he will do as he is told. Intelligente quickly agrees to follow Eggman's command. Chris ignores this and begins to walk off home, but is grabbed by Intelligente by the collar (whose eyes now have turned from a light yellow to a shade of red), who tells him that no one leaves.

Meanwhile, Chris' parents start to worry as their son hasn't showed up yet. Nelson suggests getting his guard service out there, while Lindsey ponders what it is that regular parents do when their kids are late. Nelson eventually starts to lose it and is desperate to find his son. Lindsey tells him to calm down and trust Chris. Chuck can't help but smile as all this goes on. He's proud that Nelson cares so much about his own son. Amy and Tails, who have been watching this from the outside, also feel worried for Chris and Sonic if he would mind finding Chris for them but they get no answer, as Sonic is already on his way to the school.

At the playground, E-51 is relaying to the kids that they are all going to learn how to draw Dr. Eggman. Eggman takes on many different poses, while Chris wonders if Eggman can ever be drawn nicely. However, a blue streak runs past them, making the books fly out of the children's hands and climbs up a nearby flagpole. Intelligente tells him to stop posing and warns him that Sonic is here. The doctor sees Sonic standing on the pole and immediately issues for Intelligente to destroy him. The children are all confused with what has just happened. Intelligente complies and launches missiles out of his head. Sonic runs down the flagpole and easily dodges them all, makes his way towards Intelligente and delivers a very powerful headbutt to its chest, destroying Intelligente.

Sonic walks out of the smoke and up to Eggman. Eggman honors the hedgehog a badge as today's prize for winning the battle which has the doctor's grinning face on it. Sonic predictably refuses, saying that he didn't want a "booby prize". Eggman then offers it to the children, who all pan it gracefully. Eggman then turns to leave, pinning the badge onto his jacket while hopping into his Egg Mobile and taking off. The awkward silence afterwards has the students wondering what had just happened. Sonic tells Chris that he better head for home as his parents are still waiting for him. Chris immediately does so, leaving Danny and Frances admiring Sonic for a bit before he runs off. It is now sunset and Mr. Stewart sees Chris running home. He then says to himself reflecting on his teaching skills while taking a bite on the burger only for the police officer to approach behind him. Mr. Stewart turns around and makes a run as the police officer chases.

Chris eventually reaches home to the company of his parents. That night, they all have a nice, comfortable dinner together. Amy and Tails watch from the outside while Sonic continues to stare up at the stars in the sky. 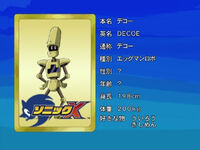 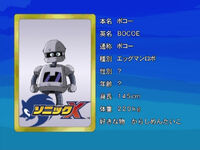 Comparison between the Japanese (left) and English (right) versions of the same scene.