Team Vector and their vehicles, from Team Sonic Racing.

Three powerful figures in the fight against evil have teamed up to become a formidable driving force to be reckoned with.

Team Vector[2] is a group that appears in the Sonic the Hedgehog series. It is a car racing team consisting of Vector the Crocodile, Blaze the Cat and Silver the Hedgehog, who participated in Dodon Pa's Grand Prix.

In Team Sonic Racing, Team Vector's members met each other at Dodon Pa's Grand Prix, which they came come to for different reasons; Silver was compelled to participate in the Grand Prix after receiving an invitation to it in his time; Blaze, who had received an invitation similar to Silver's in her world, got curious about this event and went to see what it was about; and Vector came to the Grand Prix on a secret investigation that Tails had asked him to conduct in order to get the dirt on the mysterious Dodon Pa. When the trio met each other, Silver and Blaze were truthful to each other about what had brought them here, while Vector lied that his "sources" told him to come here. Soon after, Dodon Pa came and asked the group if they were ready to compete. While Blaze wanted to back out since she did not trust a Tanuki like Dodon Pa, Vector wanted to enter once Dodon Pa mentioned the huge cash prize given to the winner. As Vector urged the others to join him, Silver and Blaze complied, but only to bail Vector out of trouble when it happened, thus officially forming Team Vector.

For the competition, Team Vector received the Beat Monster, Royal Chariot and Lightron to race in. After a few races with Team Sonic and Team Rose, Vector met Amy and heard her verdict on their mysterious host, whom she did not trust. Silver later met Team Sonic and told them what had made him go to their time, which made Team Sonic realize that Dodon Pa commanded enough power to send objects through space and time. Blaze later met Amy and told about the invitation that made her journey to Sonic's dimension. Realizing Dodon Pa was really powerful, Amy advised Blaze to be careful, who was certain she could handle Dodon Pa. A few races later, Vector and Tails discussed the former's investigation. However, their conversation was cut short when Knuckles found them talking with each other. Vector also lied that he was out freelancing when Knuckles asked why he was not in the Grand Prix with his usual team. Not long after, Team Vector would face new opponents when Team Eggman and Team Dark joined the competition.

While waiting for the next race, Team Vector were radioed by Tails, who instructed them to join Team Sonic and Team Dark on the racetrack in order to help them take down Dr. Eggman, who had intruded on the two teams' race in order to compete against them on his own as a "special guest" (which Dodon Pa permitted despite knowing it was a lie). After Vector and Silver gave Blaze a Skim Boost so she could get into position, Team Vector joined forces with Knuckles, Tails, Rouge, Omega and Team Rose. Together, they surrounded Eggman on the racetrack before delivering a massive beatdown on the doctor with their combined Wisp power-ups. However, Dodon Pa was too busy watching Eggman's beating to see who crossed the finish line first.[3]

A couple of races later, Silver saw Dr. Eggman talk with Dodon Pa about an engine, which made Silver conclude that Eggman and Dodon Pa were working together. After Silver brought these news to his friends, Tails advised them all to keep racing for now and keep an eye on the pair. Blaze later stood up to Dodon Pa when he spoke of her as if she was his performance monkey, but Dodon quickly lured her into competing in another race. Later, Silver began to get a feeling that something bad was about to happen. This sense of dead distracted him when Sonic tried trash talking with him and when Blaze tried to praise his performance in a race. Eventually, Blaze got Silver to tell her what was on his mind. While Silver doubted his intuition, Blaze trusted him and told him that they would be ready. A number of races afterward, Blaze eventually figured out Vector was lying about his motives and confronted him, and the crocodile confessed to his team about Team Chaotix's investigation on Dodon Pa, adding he was focused on winning the race regardless. Blaze later checked up on Vector to hear about his progress, and Vector said that he would have a report from Espio and Charmy soon. Not long after, Silver got some advice from Omochao on how to watch the entire race track at once, as he could not shake off the bad sensation he was having and wanted to keep an eye out for any trouble.

As the competition got more brutal, Vector received his report from Espio. Just as Knuckles went to confront Dodon Pa, Vector held him back and revealed to the teams that Dodon Pa was the President of Donpa Motors and the king of Donpa Kingdom. Dodon Pa confirmed he was hosting the Grand Prix in order to gather information for his corporation's Ultimate Energy Engine, planning to use it for philanthropic reasons. As such, the racers deemed Dodon Pa trustworthy. Still, Silver could not shake off his bad feeling, and confronted Eggman. As he tried interrogating him, Silver learned that Eggman wanted the Ultimate Energy Engine and that he has been trying to steal it. 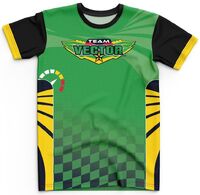