Team Dark's intro in the first battle, from Sonic Heroes.

A fight against Team Dark.

Team Dark is the second boss in Team Chaotix's story and the fifth boss in Team Sonic's story in Sonic Heroes. It is a three-on-three brawl against Team Dark that takes place in the Grand Metropolis skyline with Team Chaotix and later in the depths of Lost Jungle's swamps with Team Sonic.

The objective of these battles is to knock Team Dark off the edges of the battle platforms into the bottomless pits surrounding them. There is no damage system in this boss, meaning Team Dark cannot be defeated by simply damaging them. Grabbing the Power Cores and Rings before the opponents do is crucial. Without Rings, Team Dark will fly back farther, making them easier to be knocked off. Some characters are more suited to battle against specific Team Dark members due to having moves that are most effective against their particular formations:

If the player loses any team members, they can be brought back to the field by performing the Team Blast.

In this arena, there are a total of nine Power Cores; three blue, three yellow, and three red. The player should start by grabbing the Blue Power Core in the center (so Shadow cannot use it). When the other team is near, have Espio use Leaf Swirl to fling them into the air. While they are grounded, they can collect more Power Cores or steal their Rings. Staying aware of the other team's location is key to winning.

If Leaf Swirl does not work, switching to Charmy and shooting them off the edge is an alternative strategy.

In this area, there are only three available Power Cores and they sit outside the arena in balloons. There is also a Shield hidden in a Wooden Container on the stage. For this battle, Team Dark will be much more difficult to defeat as they will always switch to the formation that is dominant over that of the player.

The player should start the battle by having Sonic use Blue Tornado on Team Dark. This will knock them down temporarily. The player should then switch to Tails and use Thunder Shoot to collect the Power Cores in the balloons on the side of the arena, then use Thunder Shoot to keep the Team Dark members down. When a member of Team Dark is downed, the player should switch to Knuckles and use Fire Dunk to knock them off of the edge. Once all three members of the other team are knocked over the edge, the battle is over.

"Step back! Let us get the doctor first."
—Shadow before fighting Team Chaotix

"Eggman is mine. Get outta our way!"
—Omega before fighting Team Chaotix

"You don't know who you're up against!"
—Shadow after losing the second team member against Team Chaotix

"You really shouldn't mess with us!"
—Rouge after losing the first team member against Team Chaotix

"Let me show you what a real treasure hunter can do!"
—Rouge after losing the second team member against Team Chaotix

"Well, that's a load off my back."
—Omega after losing the first team member against Team Chaotix

"You will be completely eliminated."
—Omega after losing the second team member against Team Chaotix

"What was with that hedgehog that looked like my twin?"
—Shadow before fighting Team Sonic

"Who are those guys? And how do they know me?"
—Shadow after losing a team member against Team Sonic

"Not bad, but I can't let you win."
—Rouge after losing a team member against Team Sonic

"One less supporter, now I shall destroy you all!"
—Omega after losing a team member against Team Sonic 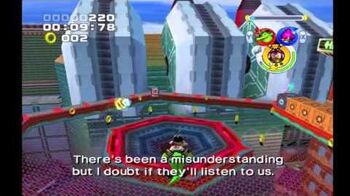 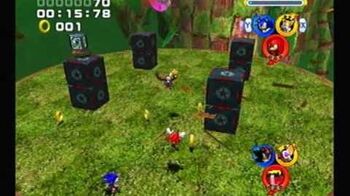