For other uses of the term, see Tails Doll (disambiguation).

Tails Doll (テイルス・ドール, Teirusudōru?) is a character that appears in the Sonic the Hedgehog series. It is a stuffed animal created by Dr. Robotnik in the image of Miles "Tails" Prower. It was used during the World Grand Prix incident in an attempt to catch Sonic the Hedgehog unguarded.[1]

Tails Doll is a mere stuffed animal in design.[1] It greatly resembles Tails, sharing the same head bangs, twin-tails, and orange and white stitching similar to the fox's fur. It has red feet with a white stripe over each foot, similar to Sonic's shoes. It also has a gray zipper leading from the back of its head to its lower back. Additionally, Tails Doll has a metal antenna protruding from the top of its head with a red orb at the end, which serves as its power source.[1]

In Sonic R, Tails Doll was manufactured by Dr. Robotnik to catch Sonic unguarded during the World Grand Prix, in which Robotnik had tricked Sonic into participating in to help him find the Chaos Emeralds.[1] The plan was then for Tails Doll, along with Robotnik and his other minions, to join the World Grand Prix as participants and be ready to attack Sonic and claim the Chaos Emeralds from him when the time was right.[5]

In the end however, Sonic and his allies secured the Chaos Emeralds without Tails Doll and the others getting their hands on them.

Tails Doll has displayed little to no personality of its own. However, despite being a mere stuffed animal, it does possess some autonomy, like being able to pose victoriously after a winning a race.

Tails Doll is able to move at super speeds, enough to compete in the World Grand Prix. Despite its meager form, it exhibits considerable ability in races due to its lightweight design.[1] It is also capable of levitation and is able to float in the air for an extensive amount of time,[1] even longer than Tails himself.

In the Sonic the Hedgehog comic book series and its spin-offs published by Archie Comics, Tails Doll is a creation of Dr. Eggman's. Also known as "Project Deadly Cuddles," it was a robot sent into New Mobotropolis by Dr. Eggman. It is first shown lying alone on a rock amongst some wreckage and picked up by Cream the Rabbit during Titan Metal Sonic's assault on the city. Cream saw the doll and assumed that it had an owner who dropped it in the assault, and so took it with her in an attempt to find whoever owned it, unaware that it was sent by Eggman. Tails Doll acted as both a spy and saboteur for Eggman as it was able to disrupt Nanites which it did so in an attempt to kill Mina Mongoose, and also allow Metal Sonic to bypass the city shield.

After the Super Genesis Wave, Tails Doll acted as a spy on the Freedom Fighters and it gave Dr. Eggman information on their plan to fix the world during the Shattered World Crisis. It was later discovered by T-Pup and was data-mined for answers by Miles "Tails" Prower.

In the Sonic the Hedgehog comic series and its spin-offs published by IDW Publishing, Tails Doll is a robot from Classic Sonic's world, created by Dr. Eggman in the image of Tails. 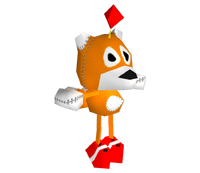