Eggman! You won't get away with this!

The first battle takes place in an area of Weapons Bed. The player must focus on the Volkan Cannon over the Lock-On Missile to attack Tails, as the missiles are too slow to catch him. When Tails is near Eggman, it is recommended to use the Punch fast or he will retaliate.

During the battle, Tails will attack by using his Volkan Cannon when he faces Eggman, and his Lock-On Missiles when Eggman is far away. Meanwhile, Tails will move around to avoid the player's shots, before closing in to attack. It is thus best to attack Tails when he is heading straight for Eggman. When within range, Tails will also use Propeller Punch. The player has to hit Tails four times to win. 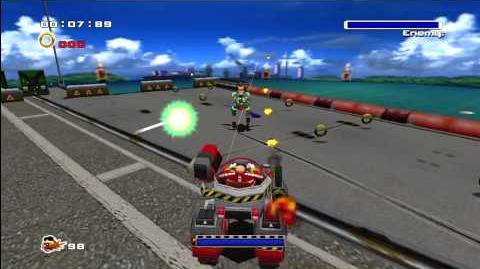 What have you done to Sonic? I'll never forgive you for this!

The second fight takes place in the central control room on the Space Colony ARK. This battle is harder than the previous one. Tails is now faster and smarter than before, and is armed with two new attacks. The Power Laser can land two hits at once if Eggman is nailed directly, and the Rocket Launcher sends out a shower of homing missiles that can cause big damage if they make contact.

To defeat Tails, the player again has to focus on using the Volkan Cannon for faster hits. Alternatively, the player can use the Lock-On Missile to detonate a Dynamite pack in the middle of the room at the right time, thereby triggering a wide explosion that can damage Tails should he get within range. After losing half his health, Tails will start using his special attacks. The missiles can be avoided by running and the laser can be dodged by getting close and moving to the sides. The latter attack especially leaves Tails vulnerable, making it possible to attack him and make him turn off the Power Laser. Five hits are required to defeat him. 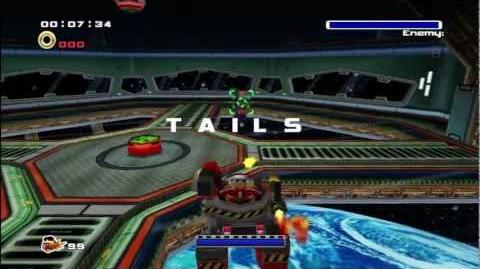