Race to the Goal against Tails in his airplane.

It's a race to the finish!

Tails: Way past Fast is the second Challenge Act of Green Hill Act 2 in the console/PC version of Sonic Generations. It is unlocked after clearing every Stage in the classic era and is playable only as Modern Sonic.

This Challenge Act takes place in Green Hill Act 2. The first section is a new exclusive area while the second is a modified version of the normal Stage. The Challenge Act includes more elements than the regular Stage, such as new wooden platforms and many more Buzz Bombers and Crabmeats.

The objective of this Challenge Act is to race against Tails in his Tornado-1 and reach the Goal Ring before he does. The competitors' positions can be seen on a bar on the screen.

After continuing down this path while crossing barriers, the player can either continue through a Shuttle loop or break through a wooden bridge with the Stomp and continue on the path below. The player will be flung to the last stretch with barriers at the end, where they can either move along the ground or take shortcuts using the Buzz Bombers, Dash Rings and Rainbow Rings to reach the Goal Ring

Tails at the beginning of the challenge.

Tails after the player completed the challenge.
Add a photo to this gallery 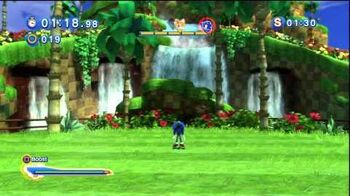