The Taga-Taga, from Sonic the Hedgehog CD.

The Taga-Taga[1] (タガタガ[2], Tagataga?) is an enemy that appears in the Sonic the Hedgehog series. It is a mass-produced, water bug-based Badnik model created by Dr. Robotnik.

Based on giant water bugs, Taga-Tagas have an oval, blue-armored body with silver spikes covering their back and a head covered mostly by a red head plating. Underneath their head plating, they have a black face with black eyes. They also have stubby, yet thick arms with a red claw on each of them, and a rear tube.

In Sonic the Hedgehog CD, Taga-Tagas appear as enemies in two Rounds, exhibiting a different attack pattern in each of them. They first appear in Palmtree Panic, where one of them appears near the start of the Bad Future version of Palmtree Panic Zone 1. Two more of them are encountered in Palmtree Panic Zone 2. In gameplay, they here hop up and back down from under bridges across waterfalls to attack the player, similar to the Choppers in the original Sonic the Hedgehog, trying to hurt the playable character. To destroy them, the player has to Spin Jump on them when they pop up from under the bridges. These Taga-Tagas show no signs of decay in the Past or Bad Future timeframe.

The Taga-Tagas later appear in Tidal Tempest as standard underwater enemies. In gameplay, these variants of the Taga-Taga here swim around in a straight line from the left to the right within their designated areas. As the playable character approaches however, they will stop up and fire the three spikes on their back: one to the left, the second upward, and the third to the right. After that, they will swim fast forward, leaving the player unable to catch up to them due to water resistance. In the Bad Future or sometimes the present timeframe of this Round, the Taga-Tags have lost their spikes due to decay. As such, they do not attack. However, they do quickly swim away when the playable character approaches. To destroy these Taga-Tagas, the player has to attack them from below with a Spin Jump.

Like every Badnik in the game, the Taga-Tagas are powered by Little Planet flower seeds which will pop out of them when they are defeated.

The Taga-Tagas are excellent and fast swimmers. They are also able to fire the spikes on their backs like projectiles. 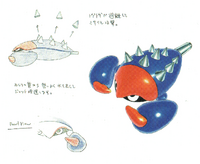